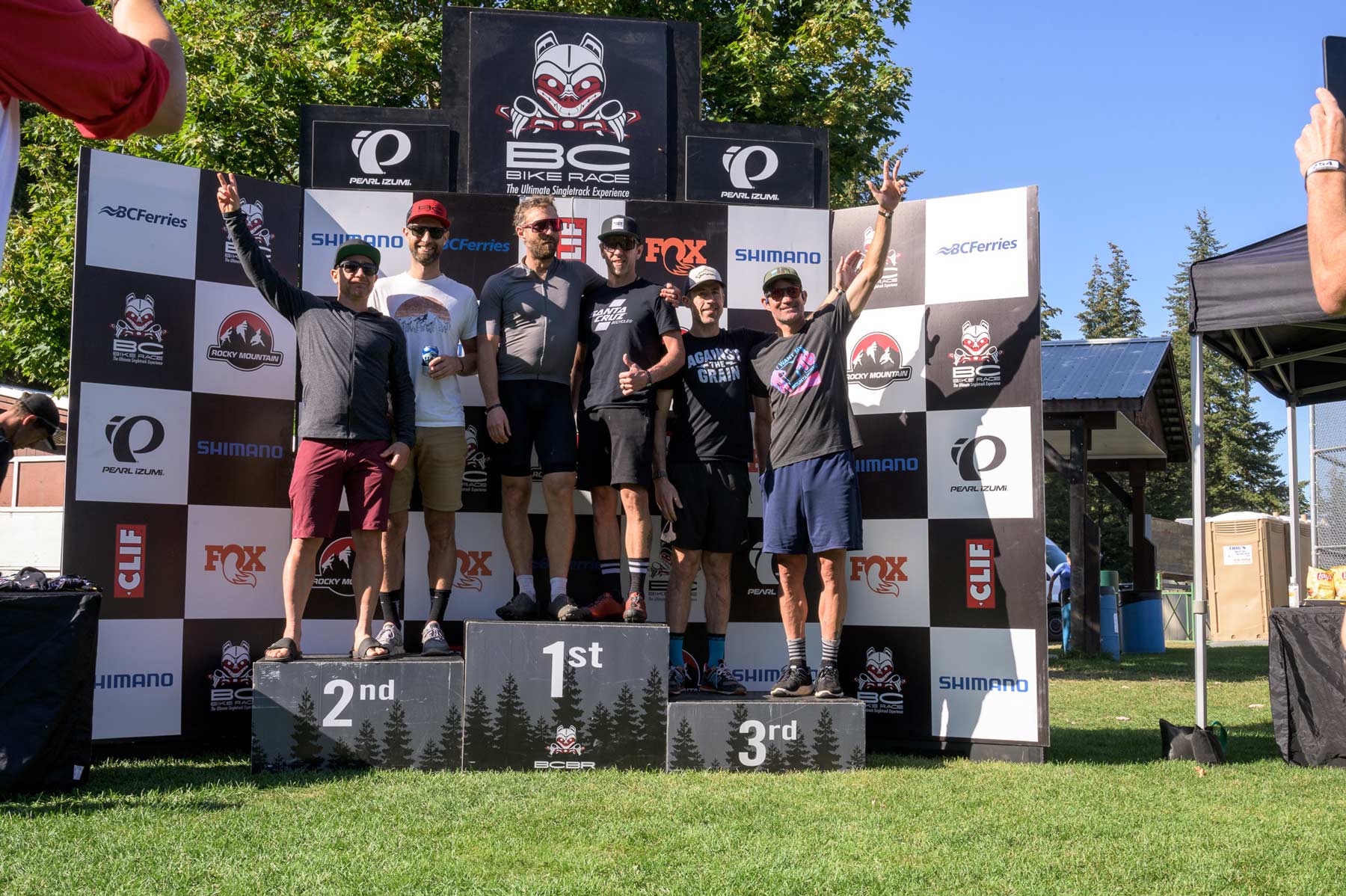 By scott schneiderSeptember 19, 2022No Comments

After two days in Kelowna, BC Bike Race hit the road. The northernmost point of this year’s event pushed to the edge of the Okanagan to dip toes every so briefly in the lush green forests of the Shushwaps. While it was a brief visit, it was a long day on the trails. The week’s first Queen stage (BCBR is nothing if not epic) took in a full 50 km of Salmon Arm singletrack.

Stage 2 was comprised of two big climbs and two equally ripping descents. The expansive route connected two trail networks and two distinct styles of riding. After climbing through the picturesque Larch Hills Traverse to start the day, riders were treated to a ripping descent into the Rubberhead side of Salmon Arm. Tight, technical flow carried riders almost all the way down to the shores of Shushwap Lake.

After a quick stop at the BCBR aid station, it was time to climb right back to the top. The reward? A warp-speed blitz through old-growth forests before dropping back into the flow – and occasional rock gardens – of South Canoe. 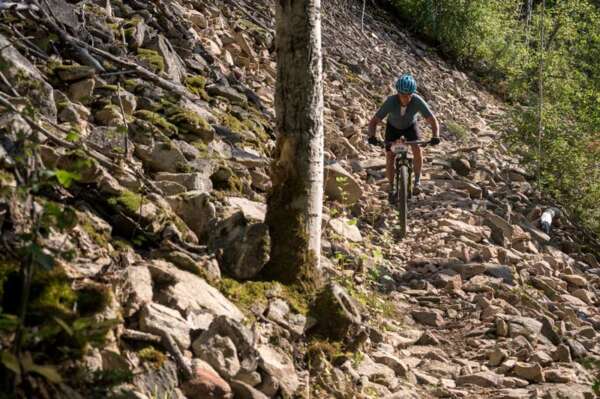 Rob Britton goes on the offensive

For Rob Britton, the extended climbs were a chance to take the race to the more experienced mountain bikers.

“Yesterday I was definitely out of my element. I followed Peter Disera into Vapor and had to let him go. But today I was feeling much more comfortable,” the former WorldTour road race said of his attack out of the gates on today’s first climb. “I figured if I could get 90 seconds, I’d be ok. I didn’t quite get that on the first climb, But the mountain bikers were on the limit. I got a bit more on the second climb, I was able to shake Carter but Luke was riding super well. Once he had a gap, I couldn’t close that.”

Luke Vrouwenvelder held on to Britton on the climb, then created a gap to take the Stage 2 win and re-capture the leader’s jersey from a suffering Peter Disera. Britton, who crossed the line second, is swimming in uncharted waters.

“I don’t really know these guys, and I haven’t raced XC as much. I’ve done sea Otter, but this is legit descending and these guys are good,” the Canadian said of trying to find his place in the field. The mix of riders at the front is making for dynamic racing. While retired from full-time road racing, Britton still has an engine to push the pace.

“If I can open the throttle from the start, I can hope to tire these guys out – today or over the next couple of days – and hopefully that works out.”

The Canadian is one of the few top riders taking on the BCBR and Gravel Explorer double. He’s leaving the second half of his Okanagan expedition for later and just focusing on this week.

“This whole year, it’s all just fun,” says the recently retired Britton. “If I’m exhausted for the gravel race, so be it. But usually, the more I get into it, the better I go.” 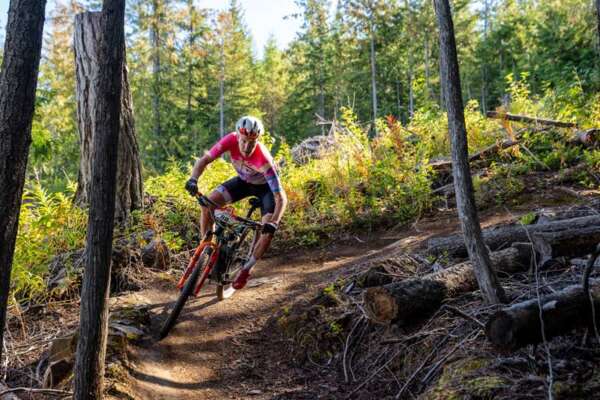 Catharine Pendrel is also recently retired and also finished second on Stage 2 in Salmon Arm. For the former world champion, lining up for her first race in a year looks a little different.

“For me, this race is about adjusting to my new fitness level, so I feel like I managed my effort better. I kept Sandra in sight for the first two hours, then really had fun on the descents. I don’t quite have it to finish it off, but I had a really fun day out there,” Pendrel said. Finding the right pace took a couple of tries.

“I feel like I under-paced the prologue. Sandra [Walter] and I were talking, saying ‘you have to race every day like it’s the last day’ and yesterday that … didn’t work out so well,” the Canadian said of sorting out pacing. “Today was good. I feel like I managed my effort better. I kept Sandra in sight for the first two hours, then really had fun on the descents. I don’t quite have it to finish it off.  But I’m trying to focus on having fun and passing people on the downhills.”

It was, again, Sandra Walter riding away with the win on Stage 2. The Liv racer extends her lead over Pendrel, her friend and long-time training partner, in the overall. Lauren Cantwell thrived on the day’s extended climbing, taking third with a solid margin in the battle for the final podium position.

Retiring, and the associated decrease in training isn’t the only adjustment to her race-week routine for Pendrel. The Canadian had her dog with her on the podium and her year-and-a-half-year-old daughter waiting in the crowd with a friend.

“It’s busy, but it’s good. For us to make this work, we both need to be able to exercise. When I get back, Keith needs to be able to get out and ride. Traveling with a toddler is … busy. But it’s so nice to have an event so close that they can also be here.”

A Masterclass in mountain biking

Not everyone struggled on what was, near-unanimously, a very tough day in the saddle. Sheldon Orr extended his lead in the men’s 60+ category and had a great time doing so.

“Oh, it was a really nice day. It just came to me,” the Delta, B.C. said. “I found some really nice guys to ride with and had a great time. We were just talking away and the climbs just disappeared.”

For Felipe Bayly, who traveled all the way from Lima, Peru to find “The Ultimate Singletrack Experience,”  BC Bike Race presents a completely different challenge.

“I did a race at home this year that was longer, but this is much harder,” Bayly said of the B.C. tech. “Usually when I go downhill, it doesn’t take 25 minutes.”

The Peruvian is also signed up for ABSA Cape Epic next year but, two days in, is realizing BCBR is a whole different beast. “Cape Epic is more distance, but this is more technical. There, you ride 100 km and maybe 2,000m elevation, but it is more flowing. These trails are totally new for me today.

“I like the trails. On the climbs, I pass a lot of people. On the descents, a lot of people pass me,” Bayly says, adding “But that’s life. You can’t be a champion in everything. I’m hoping to be a bit higher up in the results in the next few days but, in the end, you’re really just racing yourself.”

And that is what the BC Bike Race is all about. Testing yourself on a selection of the best singletrack you can find.

After visiting the Shuswap, the 16th BC Bike Race is rolling back south and climbing all the way up to SilverStar Mountain Resort to ride Beowulf. Like any epic, this 40-km loop will be physical and, with an inverted course profile, a strategic challenge for racers. The course starts way up at 1,200 metres, rolling through 11-km of sub-alpine singletrack before dropping into 10-km of uninterrupted berms and singletrack. The day still has 1,650m of elevation gain, though, and racers will have to climb back up to the resort village to find the finish line.