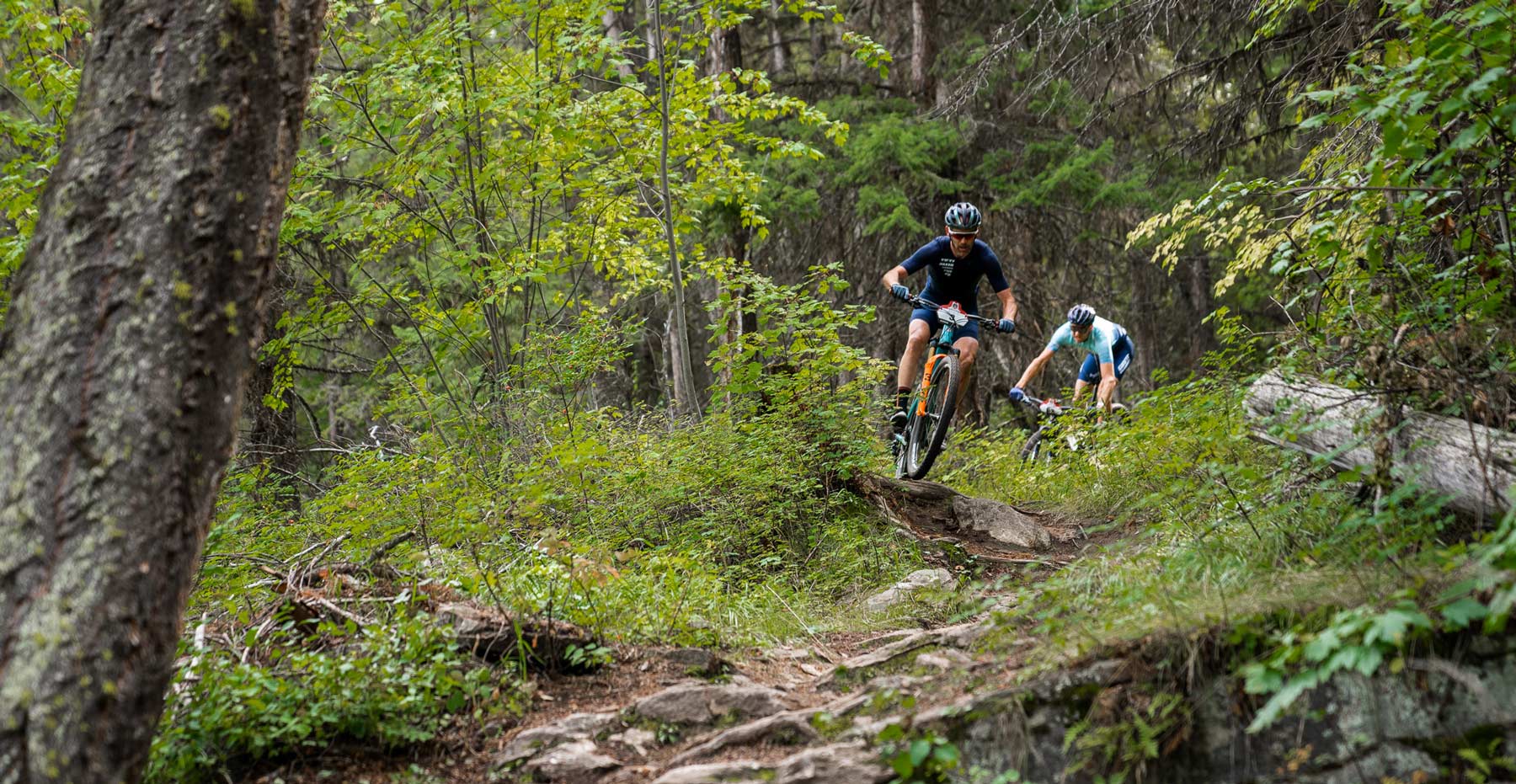 By scott schneiderSeptember 18, 2022No Comments

After a taster sample of Kelowna’s Crawford trails during yesterday’s prologue, Stage 1 of 2022 BC Bike Race dove in for the full meal deal. After a hint of rain overnight, trails were in all-time conditions for a full 40.5 km tour on the local classics.

After a quick loop to wake up the legs, racers worked their way up an 8km rolling climb towards the days first big descent. Vapour is a gnarly local classic, with big rock bluffs, roots and endless corners delivering some real pucker moments and the week’s first sample of B.C. technical riding. After a full kilometre descent, the days second climb was a leg-draining 6.5 km of singletrack and occasional double track. The reward was a ripping, high speed descent along the valley edge of Crawford Canyon. Sweeping corners and stunning vistas took the sting out of the day’s climbing as riders plummeted towards the valley below. A few rolling kilometres through the regrowth of a historic burn added some atmosphere to finish off the day. Like the forest around them, riders’ legs now have a day to recover, and also relocate to Salmon Arm for Stage 2.

After the first long day, racers are starting to find their pace. Barry Landau travelled up to the Okanagan with a group of six physicians that work and ride together in Bellingham, Washington. The BC Bike Race is a change in terrain and pace for the crew of PNW residents. As are the long days in the saddle.”

“When we decided to do this a year ago, it was a big project to get in shape enough to make it through. We kept it under control today, we know it’s a long week. It’s been on the bucket list a long time and we wanted to get it done before we’re too old.” 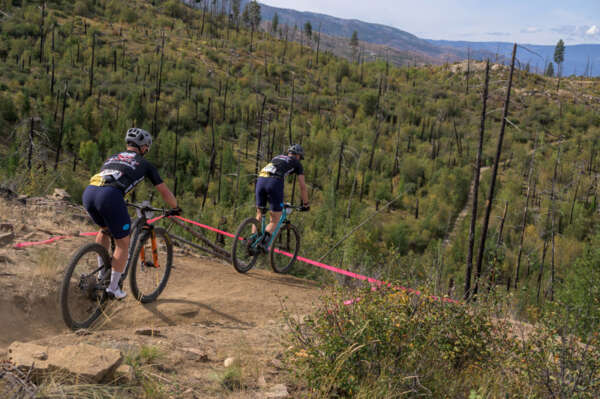 That saddle time is part of the attraction for the group.

Then, there’s the singletrack.

“I really enjoyed that first descent from the aid station,” Landau says. Being from Bellingham, our specialty is wet roots. But we’re really having a good time on these trails.”

A new leader and a long-awaited return

After testing the legs and the competition with a short prologue, Saturday was the first real test of who could contest for this year’s win. While it’s a long week on unfamiliar trails, early leaders emerged.

At the front of the women’s race Catharine Pendrel set the pace early on. The recently retired world champion put herself on the front up Stage 1’s opening climb, but with Sandra Walter locked to her wheel.

“Yesterday, I went all out. I thought if I could get time from the gun, that would be good,” Walter said of adjusting to the longer day after her blistering time in the prologue. “Catharine [Pendrel] actually led it out today, and was going really hard.”

By the time they hit the Stage’s high point, Walter was on the front. By the finish line, she’d amassed an advantage in excess of eight minutes.

“You always have to manage your effort, but I’m still going to race. For me, there’s no point in holding back, you have to go for it,” Walter said of her strategy this week. “Anything can happen. If I get a mechanical I could lose a lot of time. You want to make sure you have a buffer.”

Walter’s back at BC Bike Race for the first time in a decade. The Coquitlam rider first contested the third edition back in 2009 in the mixed team category. That year, Pendrel won the women’s race with Lun Chix teammate Katerina Nash. A lot has changed in the decade since. Stages are shorter and much more singletrack-heavy.

“In my personal view, it’s more fun than suffering through longer distances,” Walter said of the change. The Canadian chose BCBR to end her season on. “Honestly, I’ve been looking forward to this all season. It’s my reward. I love racing World Cups, but it takes a lot of effort and mental energy. Racing this, is a celebration of my season. I’m trying to be more relaxed about it, but I still want to win.”

Chloe Cross lands her first BCBR podium of 2022, in third. But Lauren Cantwell and Amity Rockwell followed, spaced out a minute apart each setting up a solid battle for podium positions.

A new leader emerged in the men’s competition. After finishing two seconds behind Luke Vrouwenvelder in Friday’s Prologe, Canadian national champion Peter Disera went on the attack early on Stage 1. The Norco rider created the first major climb alone, off the front, and never looked back. By the finish line, Disera had 1:31 over the next closest rider.

Vrouwenvelder made a sharp pass down a rock roll to get ahead of World Tour road racer-turned-mountain biker Rob Britton, using the clear trail to solidify his second place on the day. Britton held off a hard charging Carter Nieuwesteeg for the second climb, but couldn’t keep him behind on the high speed descent to the finish. Nieuwesteeg, a Fernie, B.C. local, crushed the final decent to close to within 30 seconds of Vrouwenvelder, taking third on the day. Britton finished fourth with BCBR veteran Geoff Kabush lurking not far behind in sixth.

After two solid days on Kelowna’s singletrack, BC Bike Race says farewell to Crawford and moves on to Salmon Arm. Stage 2 is set to be a proper epic and one of two Queen stages this week. It could also be one of the longest days in BC Bike Race’s 16 year history. 52 km of racing, and a staggering 2,000m of climbing, await racers in the South Canoe, Larch Hills and Rubberhead Trails. 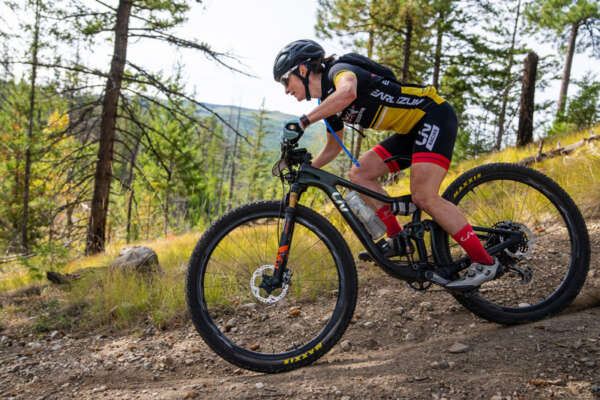