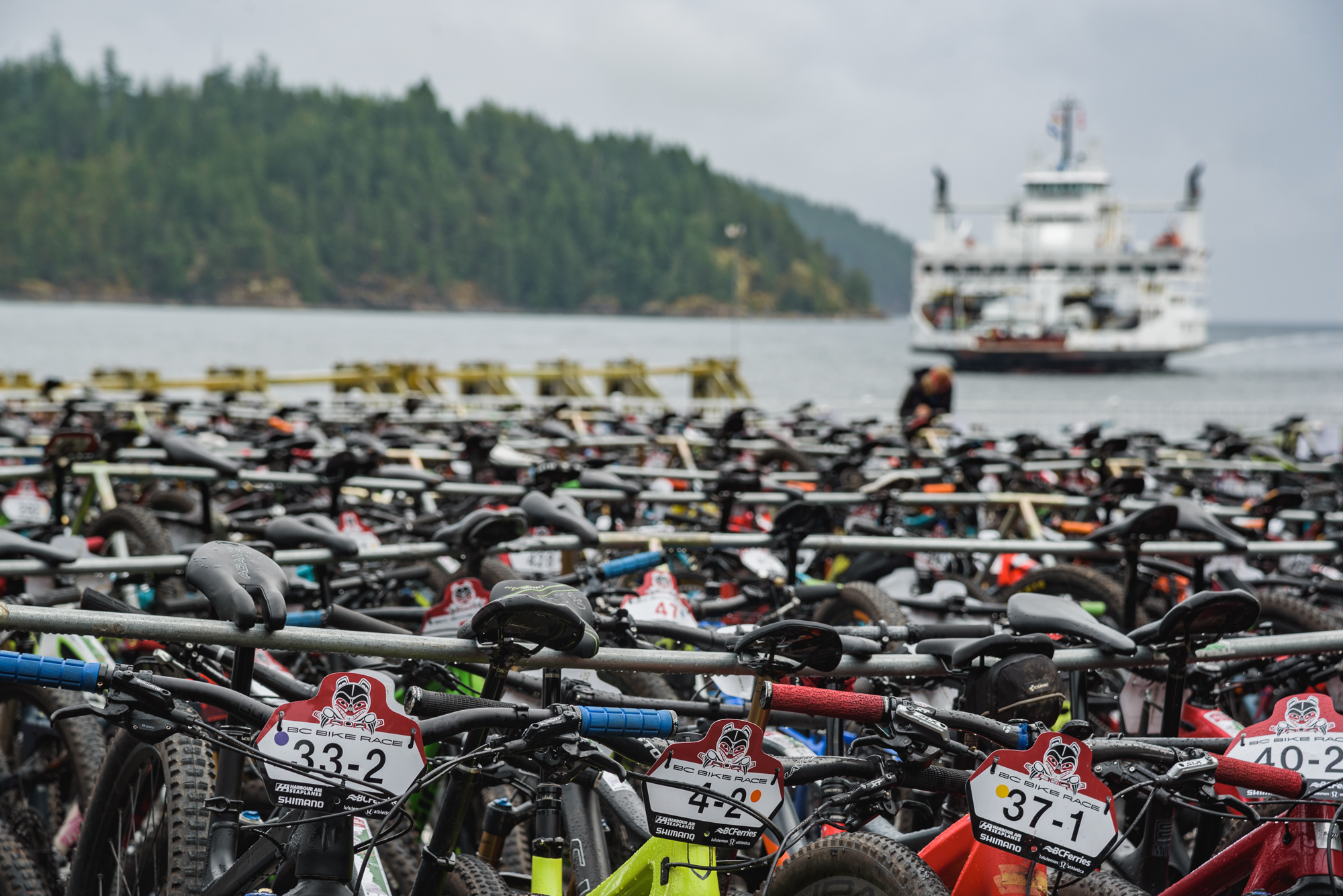 It’s Stage 5. Racers are in a relationship now – with BC singletrack. But the honeymoon is over. And like any relationship, this one’s going to take effort if its’ going to work. BCBR participants woke this morning to the sound of rain on the tent fly and nervous chatter about the 58 km point-to-point stage that would take riders from Earls Cove to Sechelt, by way of some sick sections of Sunshine Coast single track, like AC/DC, the crushed granite of Highway to Hell, the leg burner of a climb Frogger, the sinuously sumptuous Feature Trail Flying Squirrel, and the sting in the tail climb of VFR before the final descent to Sechelt. In between there would be some high speed pedaly sections of km-smashing double track that would be welcomed by some, dreaded by others. 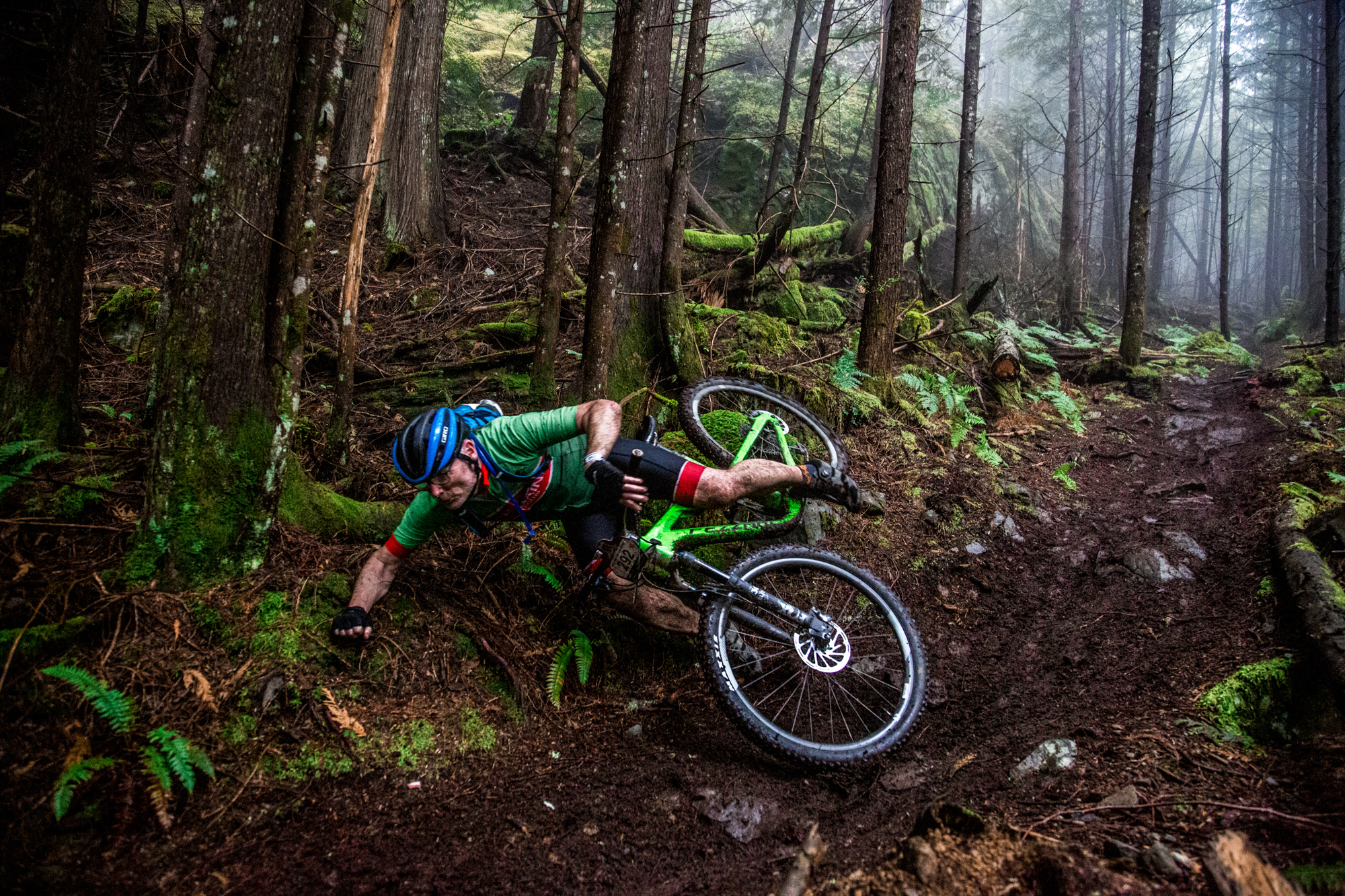 After breakfast in Powell River, racers were shuttled to Saltery Bay then boarded a BC Ferries vessel and Harbour Air floatplanes for the trip across the inlet to Earls Cove, where their bikes were waiting like well-fed horses ready to race for a casual 11 am start. But there was nothing casual about this beast of a stage. It was a brief spin uphill from the start line, before racers started sinking their teeth into a mid-morning appetizer of fast dirt and gravel. After yesterday’s Powell River single track tour de force, Payson McElveen (Team Orange Seal – Trek) seemed to be taking a liking to Sunshine Coast dirt, pedaling to a Stage 4 win, but with the narrowest of margins – one second. Never trust a dude with a moustache – McElveen was on fire mid-stage, staying wheel-to-wheel with the young Felix Burke (Rocky Mountain.) A chase group, including wily veteran Geoff Kabush (Yeti-Maxxis) and Benjamin Sontag (Clif Bar), was chewing up trail half a minute back. Was Kabush toying with Burke, saving something for an all out assault later in the stage? Given the uncomfortable closeness of the battle, neither mentor nor disciple appears to be holding any cards. 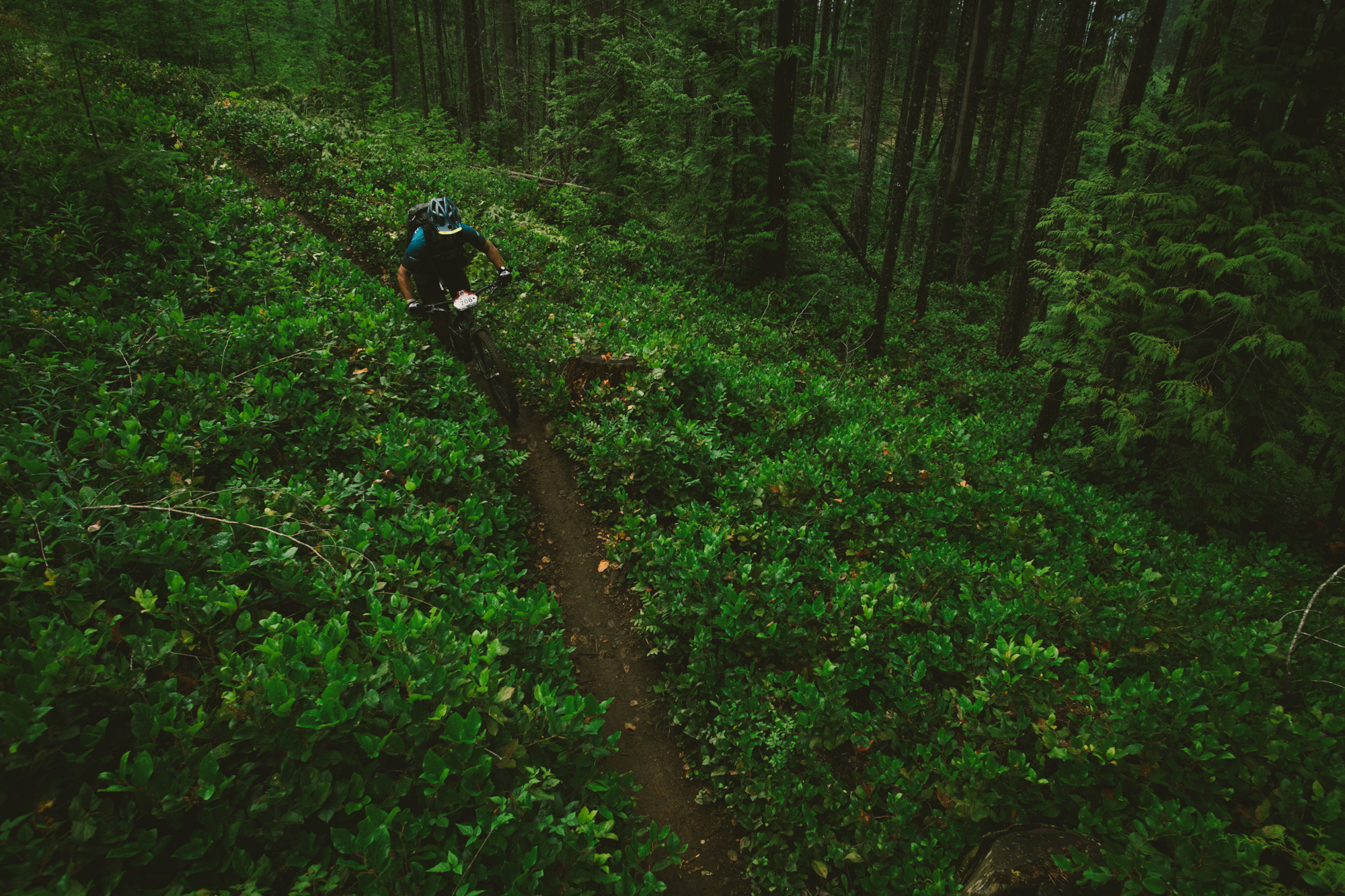 And what’s up with Australia and New Zealand at BCBR Lucky 13? Australia’s Brad Clarke is absolutely burying the competition in Solo Masters Man. Clarke, with a lead so massive he could order take-out pizza  in the middle of a stage and still retain the yellow jersey, easily retained the lead. Equally impressive as Clarke’s lead, is the one Kiwi Mandy Hancock has in Solo Women (Veterans). Yet with two stages remaining, anything can happen. In this case, however, it might take a meteor strike. 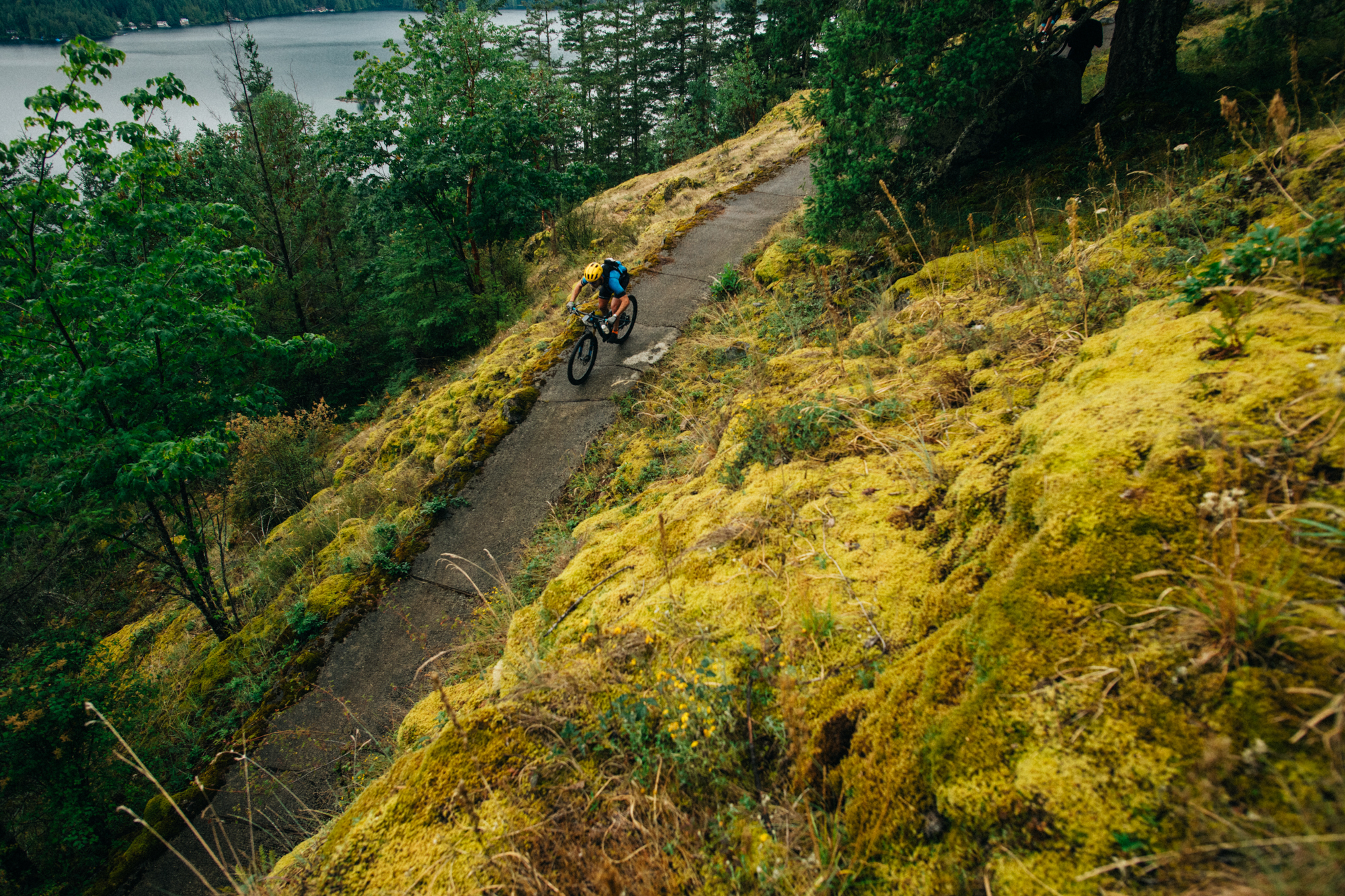 Jena Greaser has a lock on 3rd place in Solo Women, but has stated she longer has designs on Katerina Nash’s (Clif Bar) yellow jersey. After focusing on Enduro over the past few years, BCBR Lucky 13 is like a 7-day smack down, tune-up, reintroduction back into the world of XC stage racing for this Connecticut-born, Fernie-based ripper. 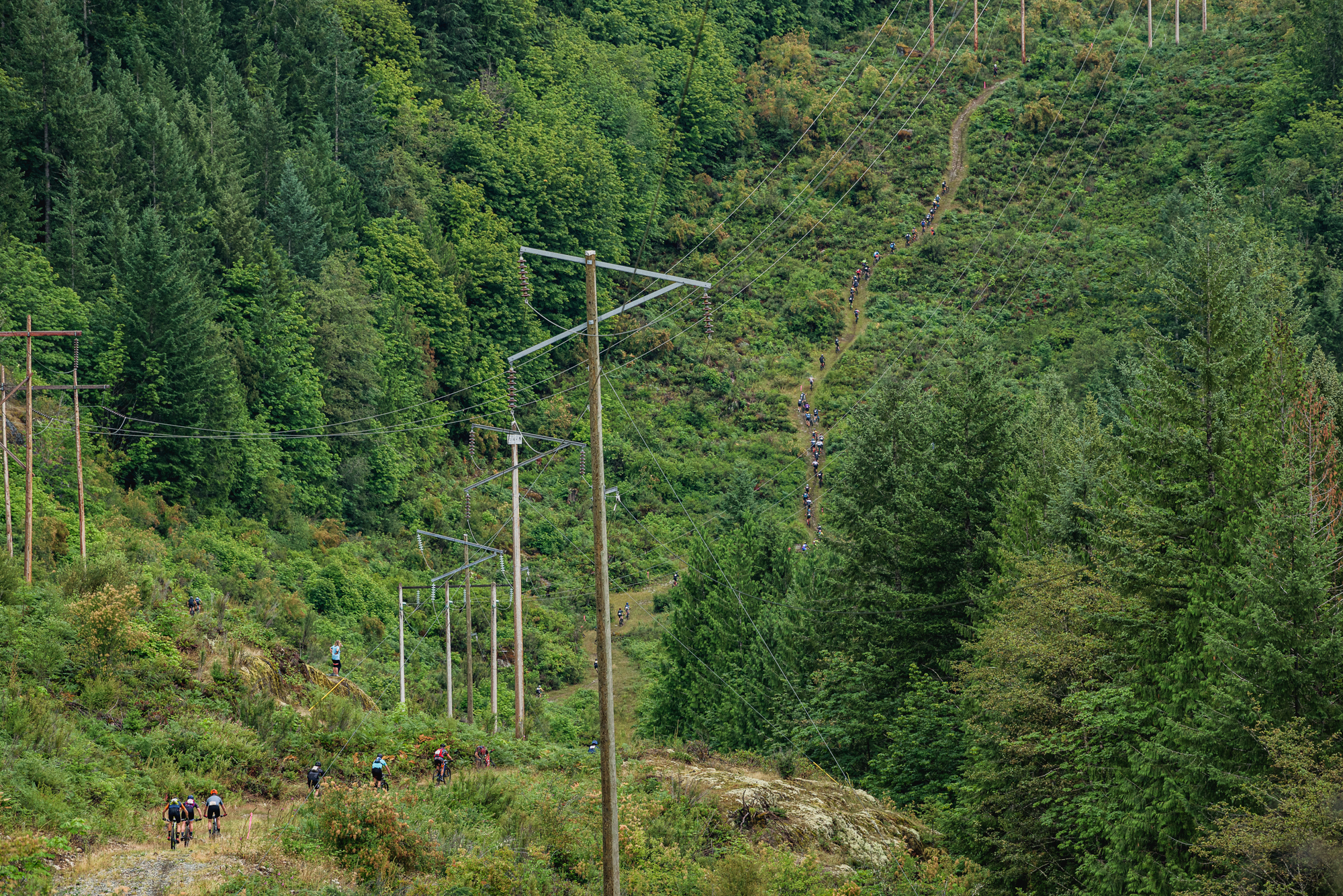 “It’s next level in intensity. Today’s stage was a point-to point and that’s pretty cool,” Greaser said. “This race has been on my to-do list for awhile.”

Her happy place is tech climbing and descending, and there’s plenty more of that to come. 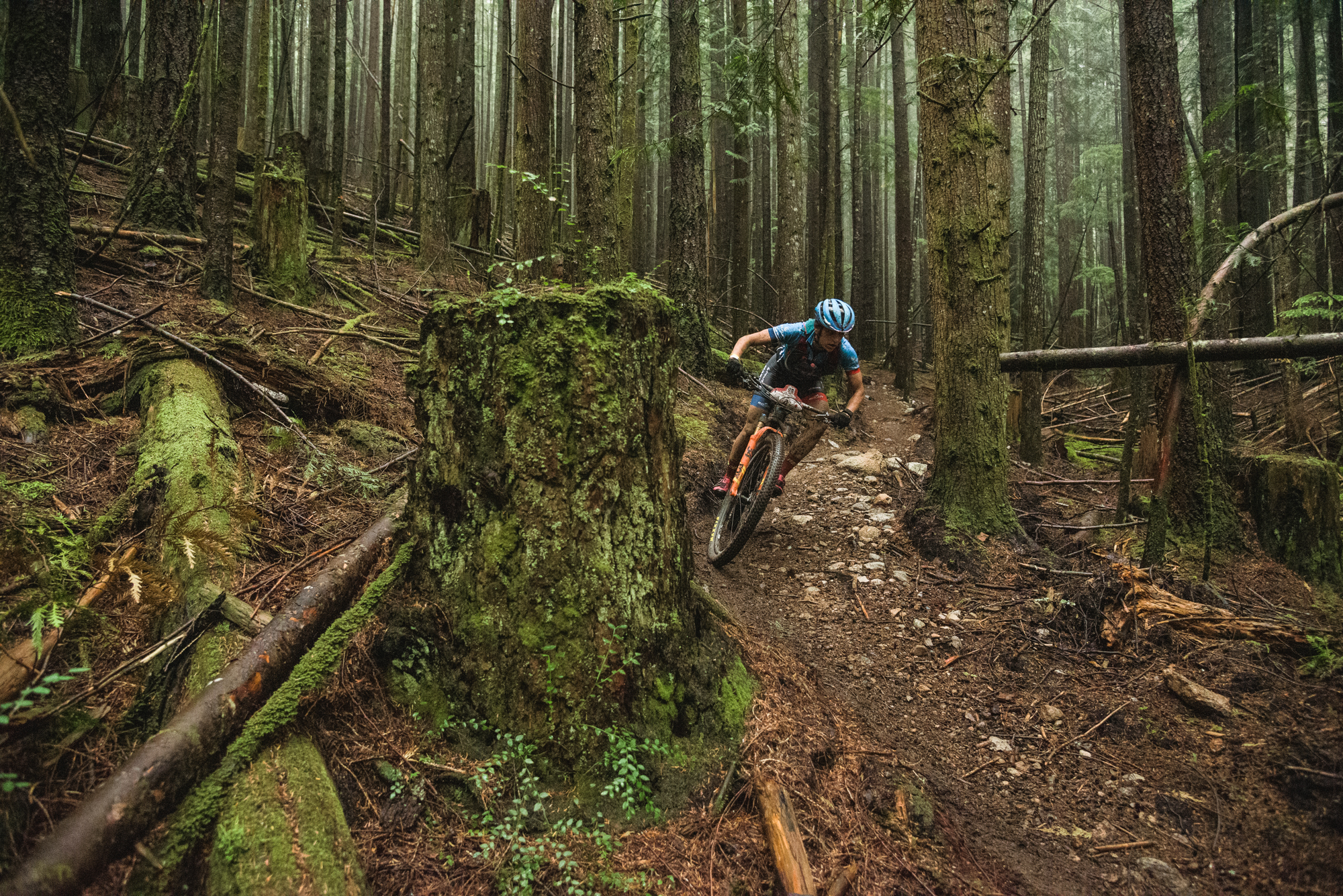 In Teams of 2 (Veteran 80+), an entertaining singletrack slug fest continued at a furious pace on this grueling stage, considered the toughest by most BCBR participants.

“It’s turning into a real dog fight out there,” said Graeme Martindale and Norm Thibault (TNA-Frontrunner,) who have been fighting hard to claw back time lost on team Cahilty Racing early in the week.

Thibault flatted but so did rival Mike Rauch of Cahilty, proving that mechanicals can make the difference in tight races. It was nose to the wheel for these Canadian counterparts, grinding up the final ascent on VFR before plunging into Addernach and Lee’s Big Easy, both slick and sporty from last night’s rain. It was TNA-Frontrunner across the line first, claiming Stage 5, but the yellow jersey remains elusive for this North Vancouver-Vancouver Island team.

Martindale is loving his BCBR Lucky 13 experience, digging on the optimized amount of A-list singletrack with minimal transitions. 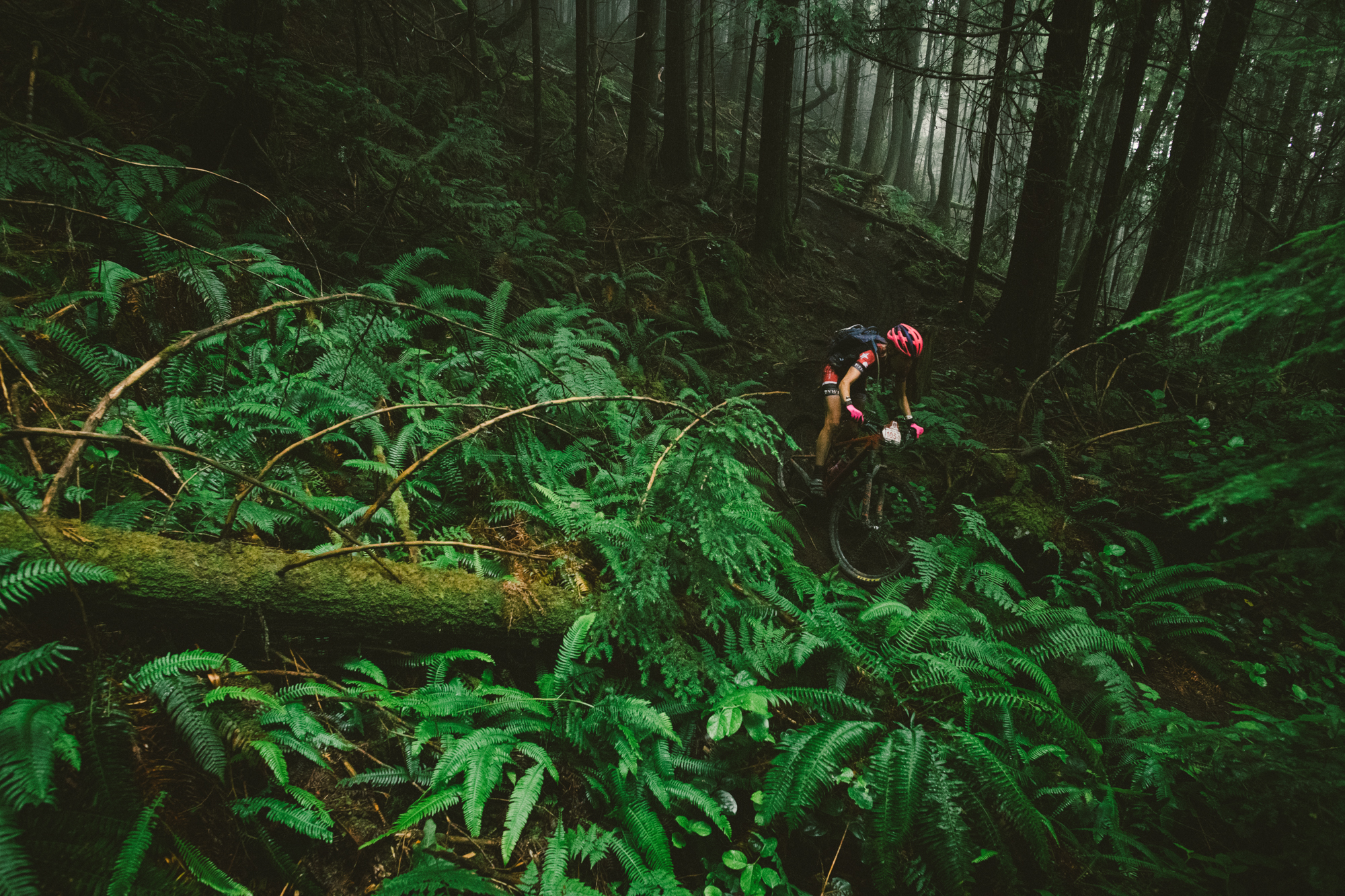 BCBR is a race at its core, but it’s also about building a mountain bike tribe. It’s a tribe that is extending ever farther into unlikely places, like Staten Island. Tom Corcione is a retired NYPD cop with a street wise accent that would make Al Pacino shake in his bike shoes. Four years ago he didn’t know a mountain bike from a moped. He went to Moab on a friend’s recommendation and rented a bike. He was hooked, now he’s at BCBR with his buddy Gerard Stanford (Teams of 2, Veteran 100+,) getting their freakin’ collective minds blown day after day.

“When I go home my friends are going to ask me ‘How did you get so f***g fit?’ I’ll tell them go ride in BC for a week.” he said, while crushing some post-race lagers. “This is the real deal up here.”

The camaraderie of the mountain biking tribe extends all the way up to the elite riders. There was plenty of action in Solo Men. Kabush crashed on some slick woodwork while Kerry Werner (Team 7mesh-Kona) was leading the chase group for a time. 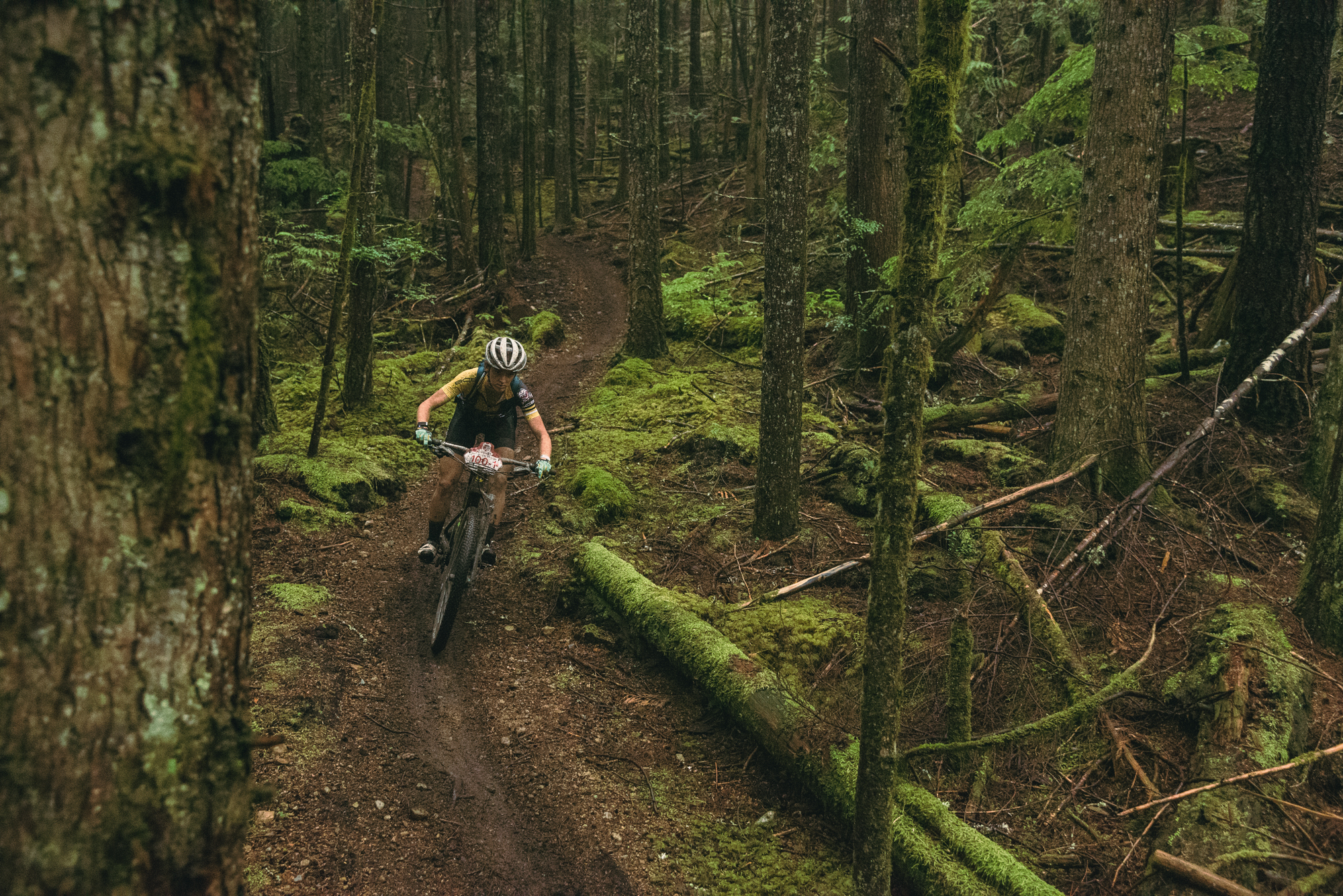 “I bonked on Frogger and I went sideways on a root on another trail,” Werner said. “I had some ups and downs today.”

So did Kabush, Burke and McElveen. The BCBR bike patrol and moto teams do their utmost to ensure that ribbon and course markings are clear and in place well before racers hit the course. But sometimes the best laid plans can go awry, as they did today when unknown individuals removed ribbons. This intentional tampering sent McElveen and Burke briefly off course. In a testament to sportsmanship,  Burke, McElveen and Kabush agreed together that this was not the way the race should be decided. Time credit was given to Burke and McElveen to essentially re-set the clock as it was on Day 4. Kabush takes the stage, Burke maintains the yellow and the slim margin of 3 seconds remains. 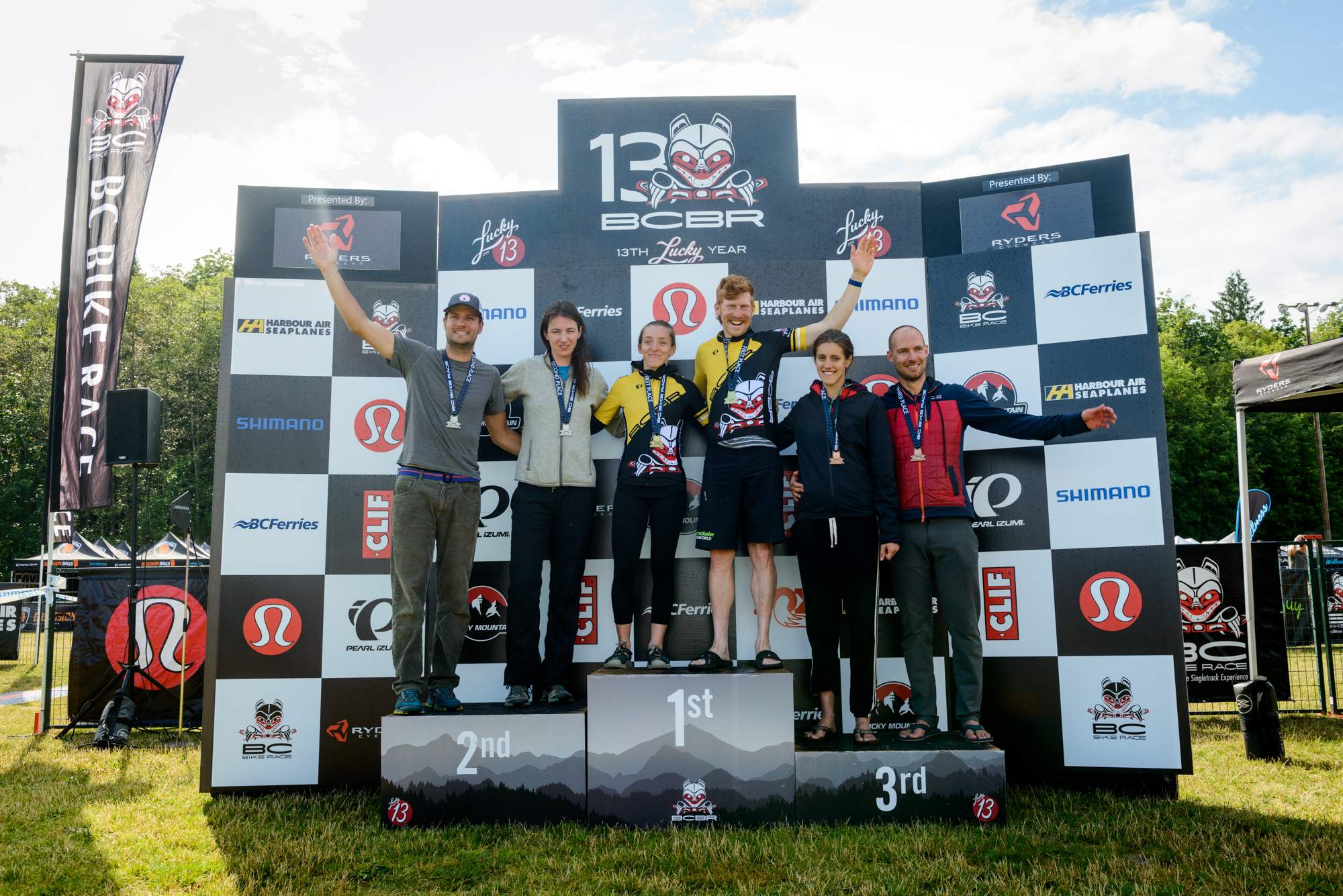 Tomorrow racers embark on Stage 6, another point-to-point from Sechelt to Langdale. With 1400 m of vertical climbing, this 50 km stage will give riders a heaping helping of delicious dirt. Including the Feature trail Rio Grande and the grand finale, a 7km descent down Highway 102 to the finish at Langdale Ferry Terminal. 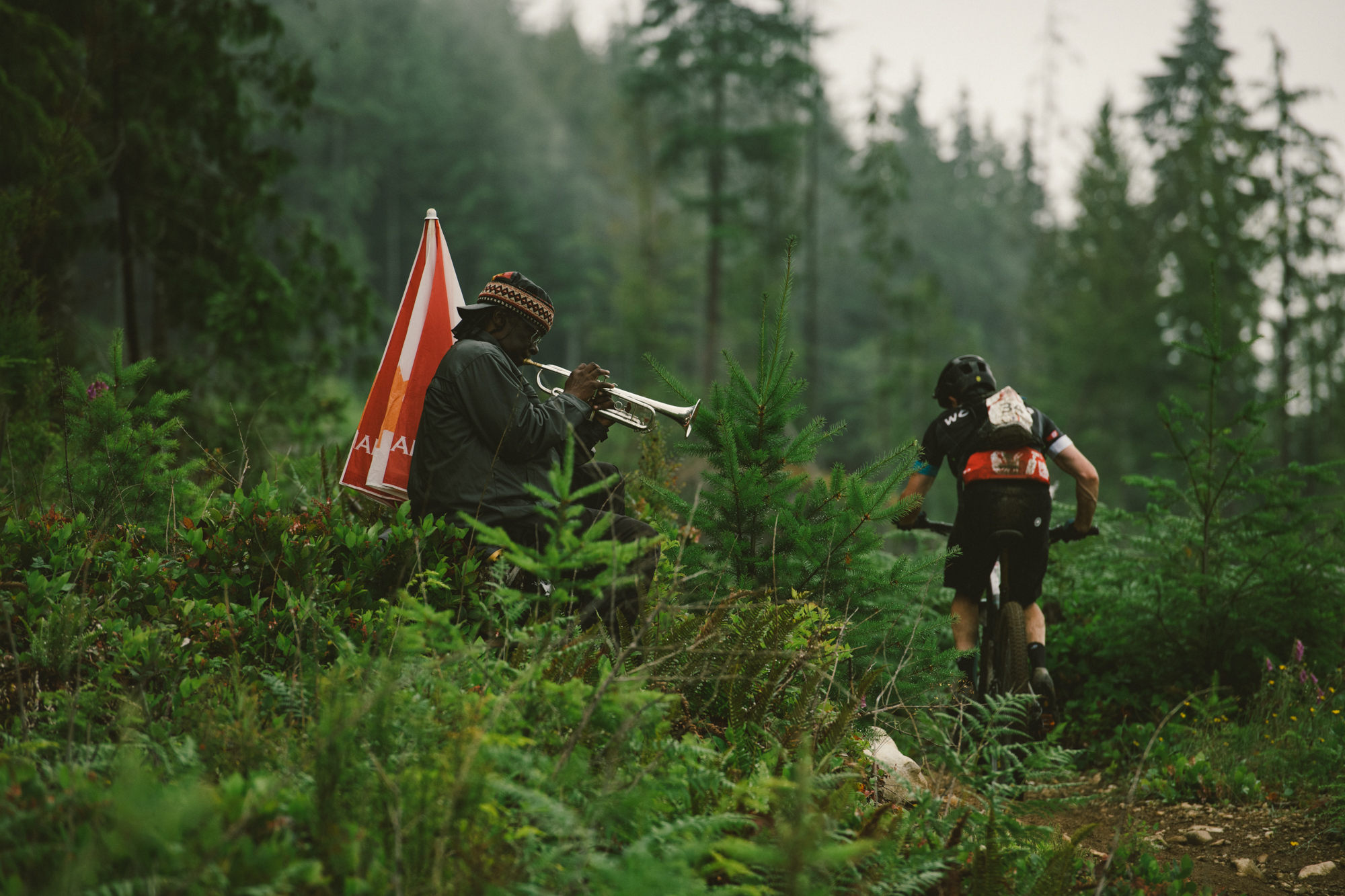