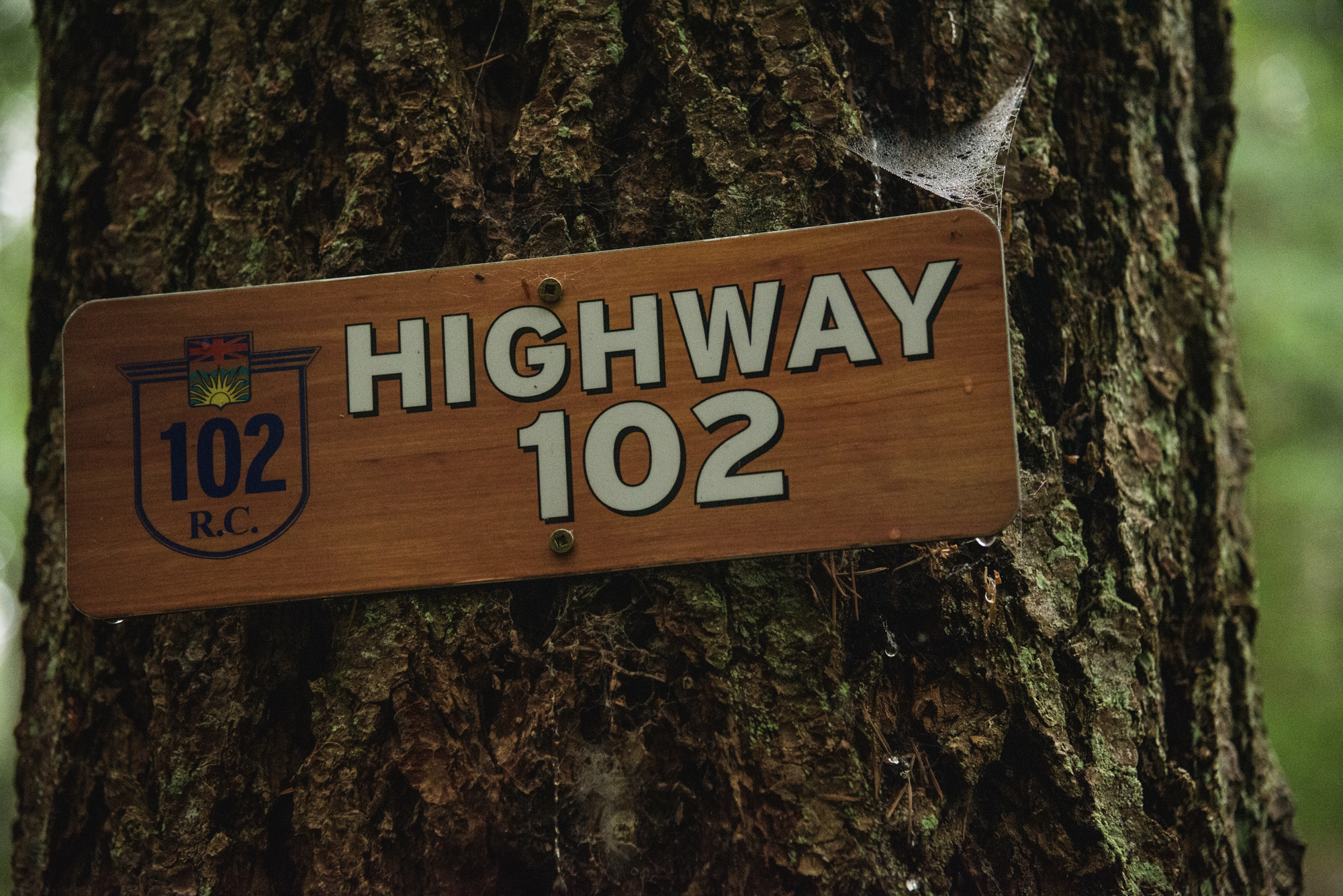 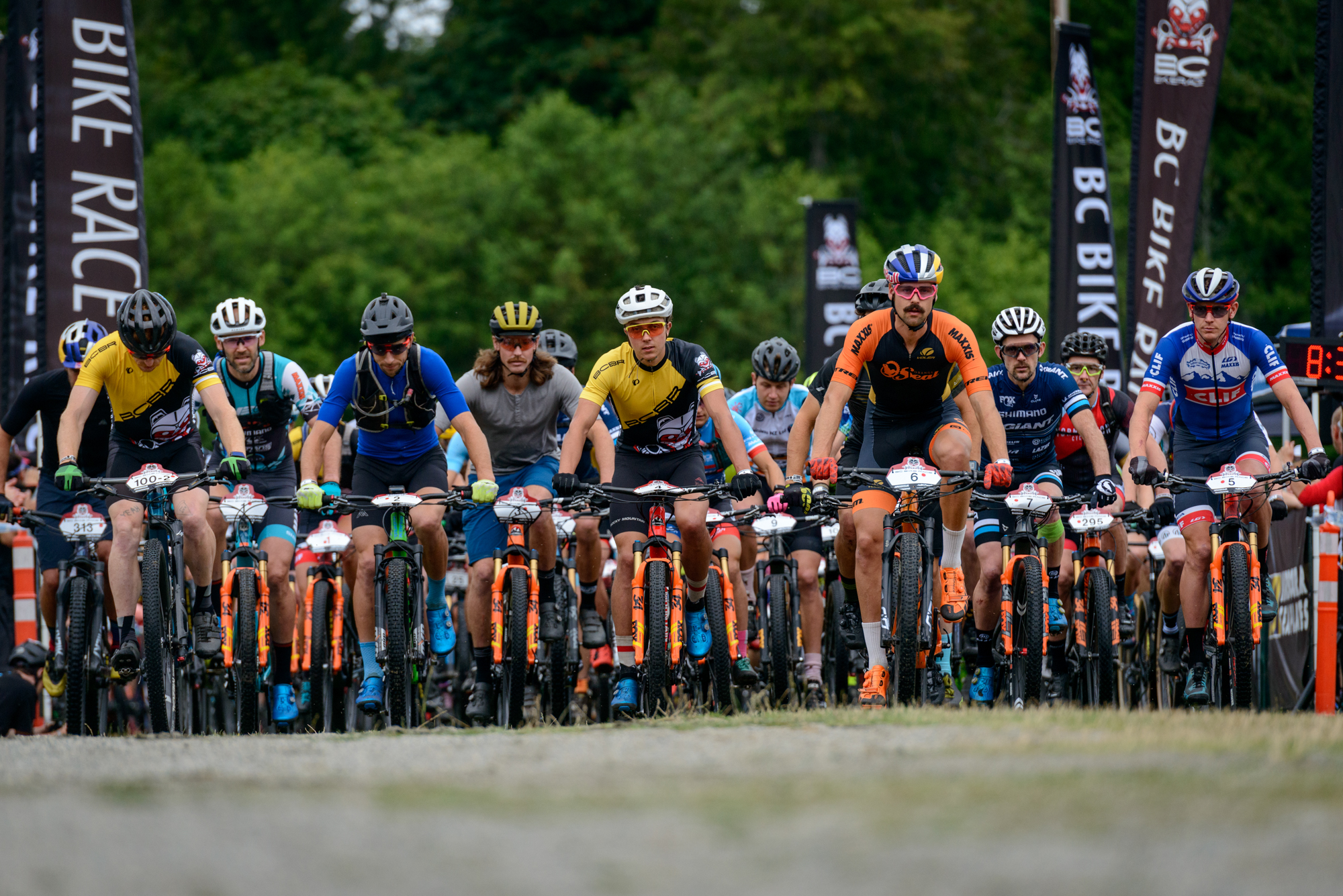 After five stages, the trail starts to take its toll. Yesterday was a grinder, a boat load of up and down, with plenty of fast pedaling to make the legs beg for mercy. Racers woke to a grey but eerily calm sky dangling over Sechelt and the chicken, BCBR’s community alarm clock. It was a leg-stretching 10-minute stroll to another hearty and delicious Whistler Cooks breakfast for all 600 racers, many of them exhibiting a little wear and tear. Soon it was go time; time to get into the mental zone required to bite off a burly 50 km stage, with a grand finale 7-km descent to the ferry terminal at Langdale. 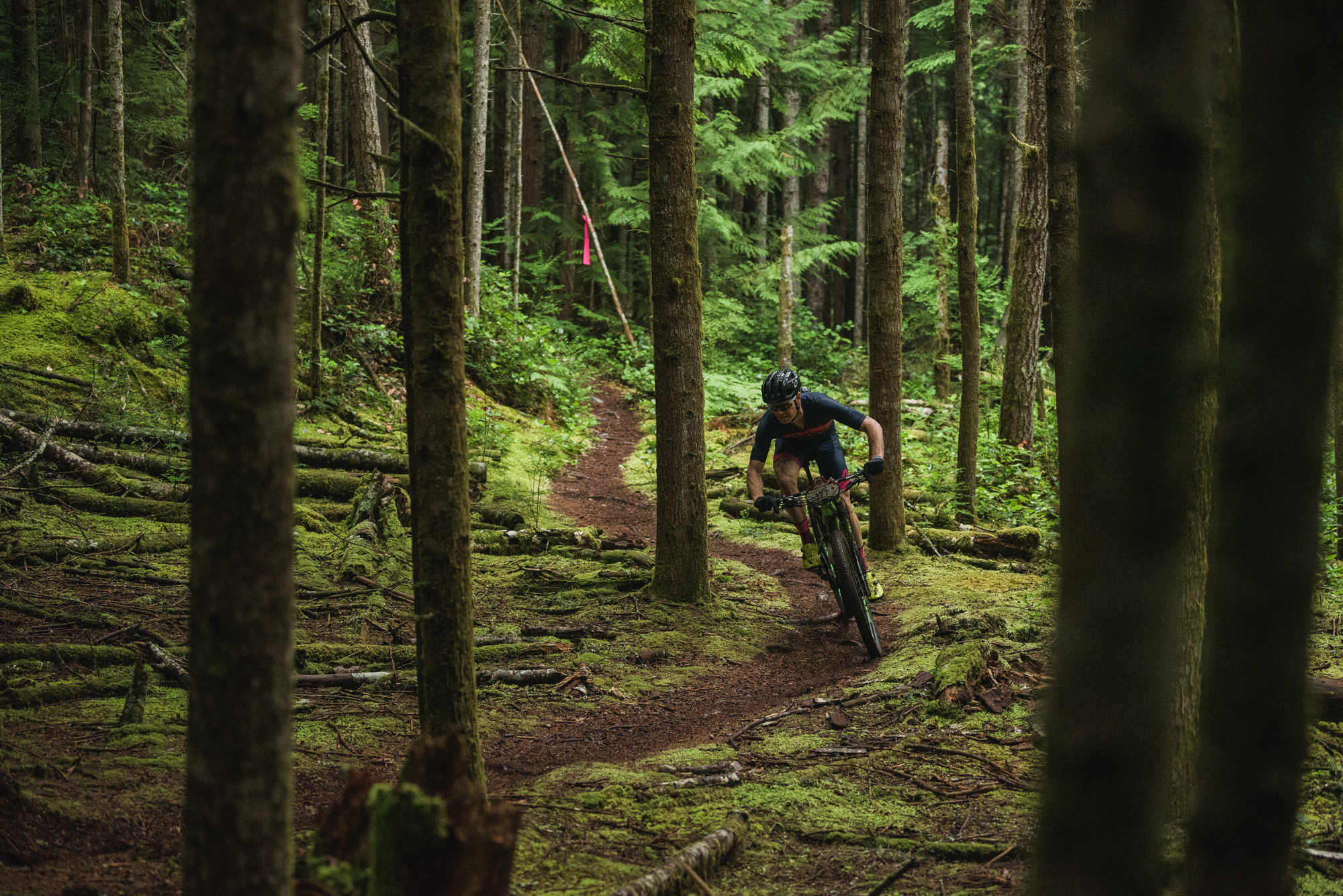 In the Solo Men category, Lucky 13 was shaping up to be one of the most exciting contests in recent BCBR history. A battle of strategy and endurance, between the youthful power and exuberance of Felix Burke (Rocky Mountain) and the calm experience of BCBR defending champion Geoff Kabush (Yeti-Maxxis.) But there were others in the competitive mix. Benjamin Sontag (Clif Bar,) winner of the 2010 La Ruta de los Conquistsadores, is new to BCBR but has been nipping at the back tires of leaders all week. Payson McElveen (Orange Seal-Trek) another newcomer to this race, won the Powell River stage and rode a strong race yesterday, narrowly missing a podium finish. He was looking increasingly confident, and willing to apply heat to 1st and 2nd placers, Burke and Kabush. Kerry Werner (7mesh-Kona) is a BCBR alumnus who knows the course from last year and has been a factor all week. 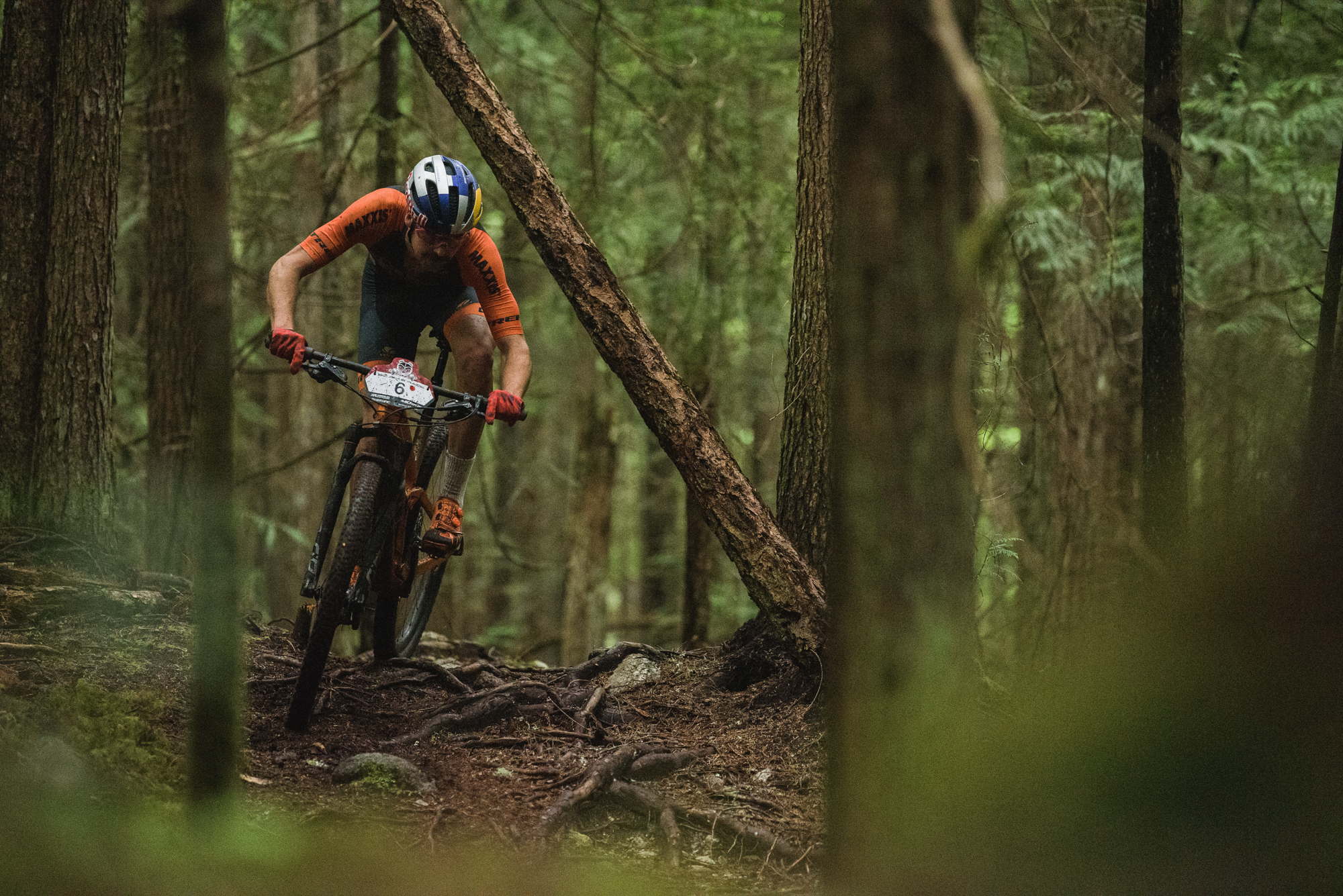 One thing has become clear this week -whether it’s Solo Women leader Katerina Nash (Clif Bar) and chasers Courtenay McFadden (Pivot-Maxxis) and Jena Greaser (Rocky Mountain), or the elite men, these racers not only have aerobic engines that won’t quit but they also have technical riding chops to shred trail smooth and lightning fast. 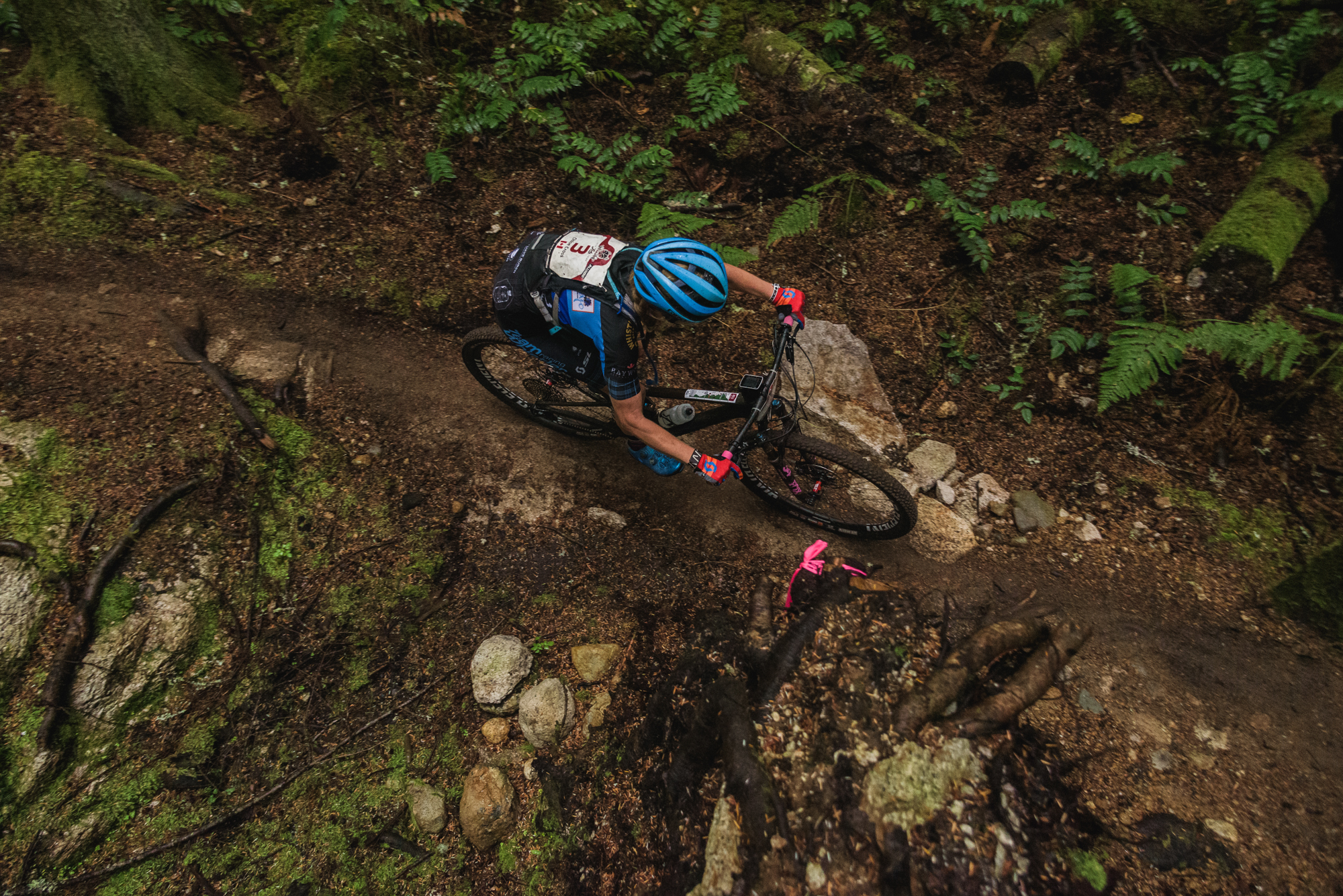 20 km into the stage there was an easy pedaling calmness in the lead group, 10-strong and among them the usual suspects as well as others like Stephen Hyde (Cannondale.) He’s one half of the Teams of 2 (Open Mixed) category leader with fellow Cannondale rider Kaitlin Keogh. She’s a cyclocross crusher, relatively new to XC mountain bike racing and was pedaling smoothly in a group with Nash, McFadden, Greaser and Aida.

“I didn’t really mountain bike before this summer. BC Bike Race has been like a crash-course in technical riding,” Keogh says.

Judging by the way she’s been handling her bike this week, we might be seeing more of Keogh on BC singletrack in the future.

Among the men, there was a mood early in the race like the calm before the storm. Neither Kabush nor Burke appeared willing to make a statement and lead a charge, biding their time, trying to decipher strategy in the other’s movements. McElveen had fire in the eyes after being kept off the podium yesterday. Werner looked strong along with Sontag. Sam Schulz (Rocky Mountain) and Michael van den Ham were in the mix as well. Burke had been wondering all week whether or not the veteran Kabush was playing with him, holding something in reserve for an attack. 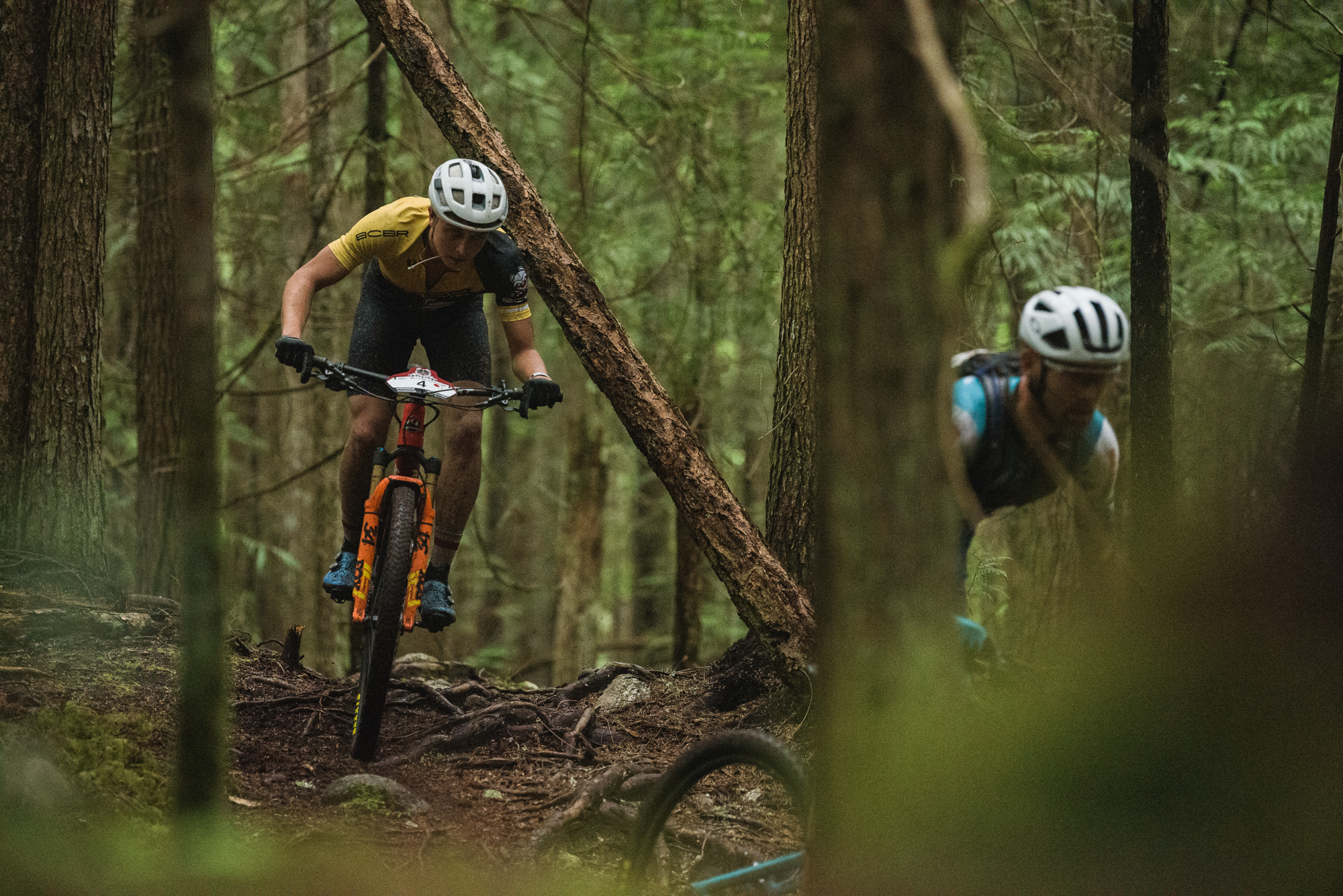 Mid-way through the stage, Burke started to push the pace on a series of uphill single track climbs including MJB (Mexican Jumping Bean), Kevin’s and the infamous Up and Around. With a small gap, Burke attacked the next road section and extended his lead. When the young Rocky Mountain shredder dropped into the screaming, switchback descent of Hwy 102, he was in the lead with McElveen, Werner, Kabush and Sontag giving chase. The trail conditions were off the charts for fast racing, tacky from recent rains with enough bacon grease on the woodwork to keep things spicy. As the leaders charged toward the Langdale finish line, it was looking like the seconds that separated Burke and Kabush all week would grow to a substantial margin. And so it did, with Burke claiming first with a time of 2:35:40, just over 2 min ahead of McElveen and Werner who crossed the line in an exciting 2nd and 3rd place photo finish. Kabush came in an unusually distant 4th, 3:33 behind the day’s winning time. Sontag came in 5th, 20 seconds behind Kabush, despite injuring his arm seriously in a late-in-the stage crash. Sontag will be unable to start Day 7. 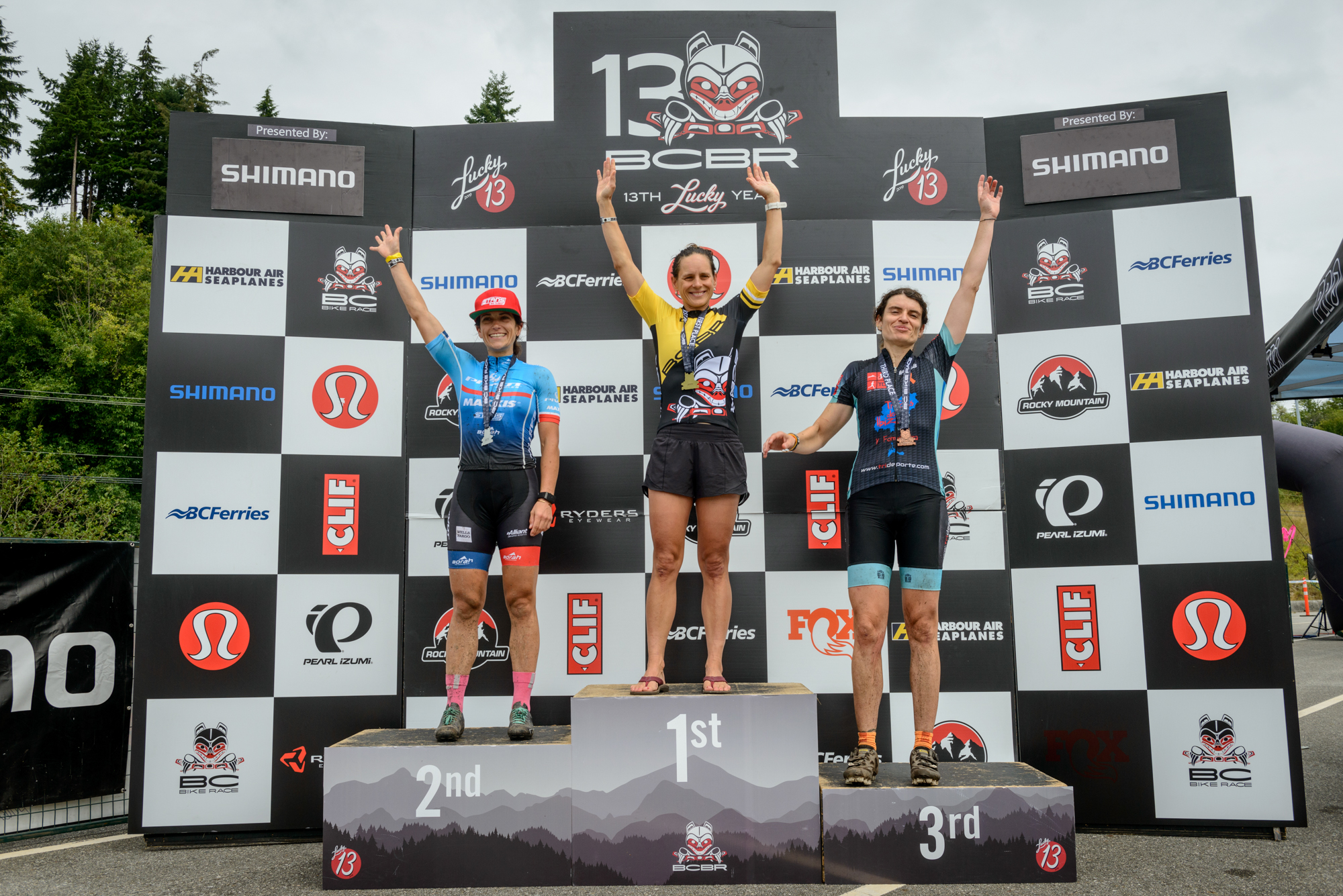 In Solo Women Katerina Nash (Clif Bar) continued her dominance, but there was a new face on the podium, with Spaniard Ada Xinxo claiming 3rd place. For Xinxo, sharing the podium with Nash, one of her cycling idols, was like a dream come true.  Jena Greaser had a tough day, crashing hard on the final descent.

“I was super rattled after that,” said a bruised and battered Greaser. “It’s a long race and stuff happens.” 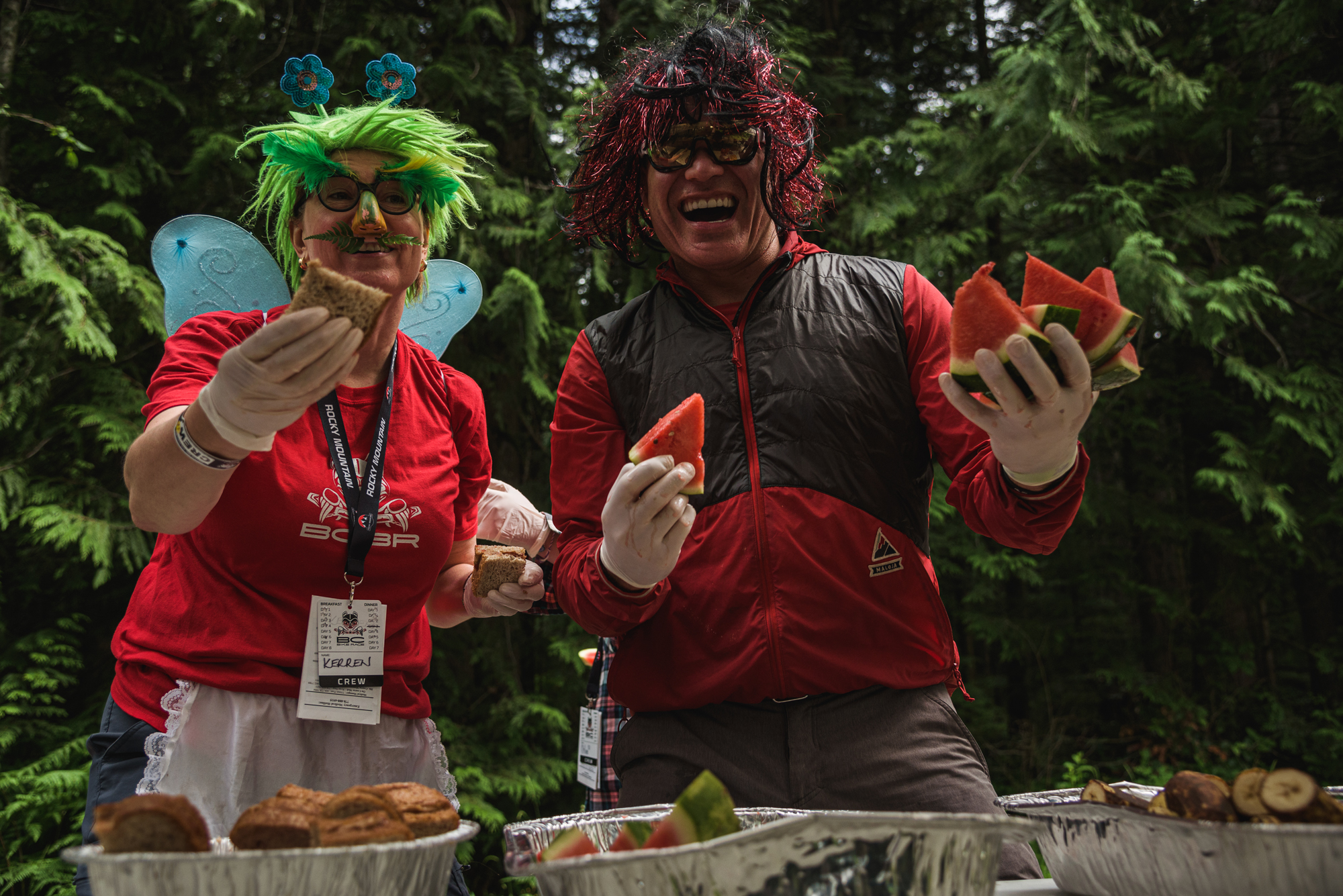 Karen Hill of Melbourne Australia knows about long races. She’s a talented recreational racer who belongs to the worldwide mountain bike tribe. She uses her bike to experience the world and has competed in The Yak Attack in Nepal, MTB Himalaya, a stage race in Sir Lanka, and now BCBR. With plenty of stage racing experience under her belt, she knows how to dig deep and power through the pain and fatigue

“My legs were working better today. Yesterday was a hard one,” Hill said, who has held steady in 8th place all week and entered the chute today after the Hwy 102, pay-off pump-track descent maintaining her overall position. 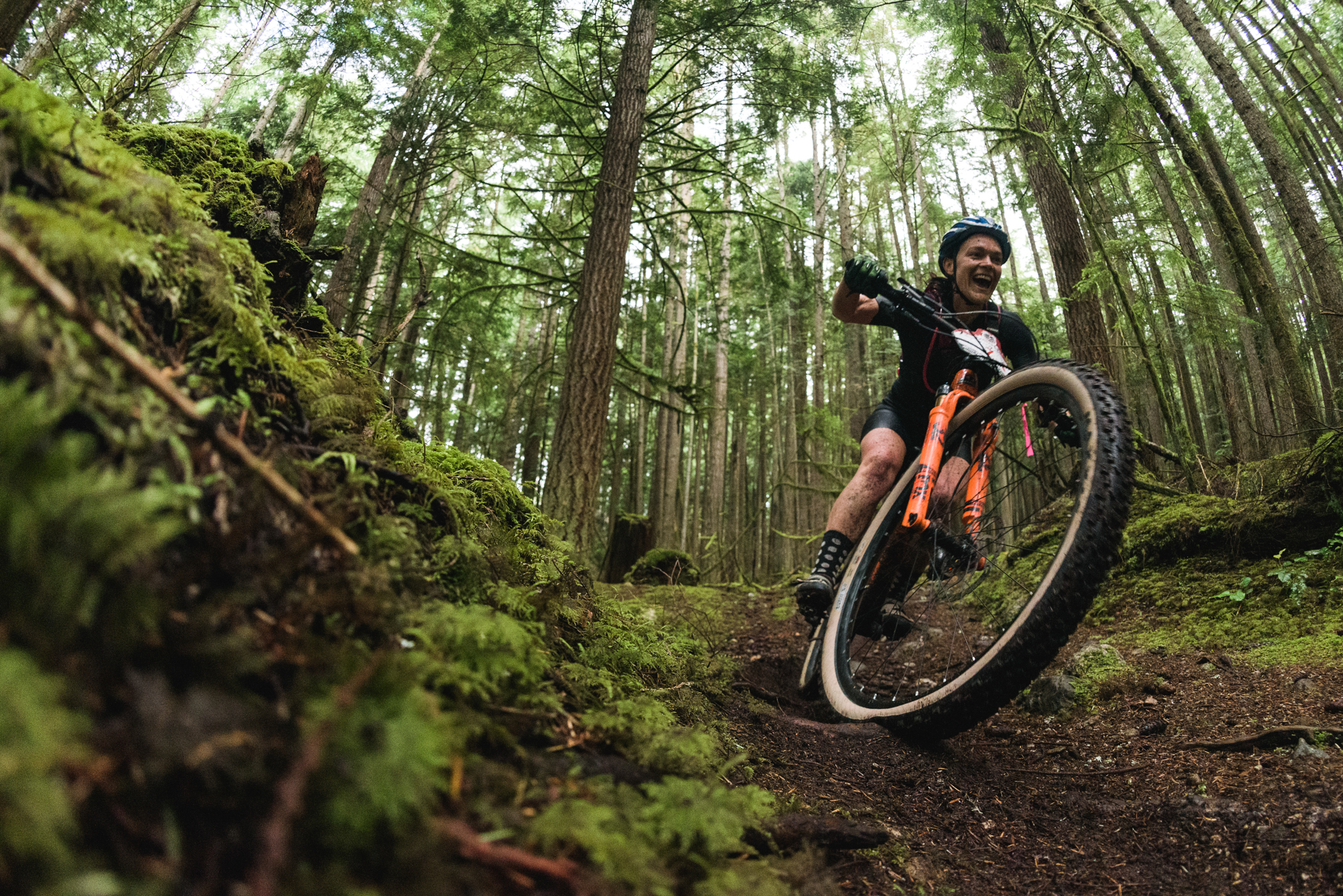 In another exciting contest, the Fraser Valley power duo of Mike Rauch and Simon Blythe (Cahilty Racing) reasserted control over Teams of 2 (Open Men) after suffering a flat during yesterday’s stage, finishing the Sechelt to Langdale course in 3:10:35, ahead of rivals Graeme Martindale and Norm Thibault (TNA-Frontrunners). 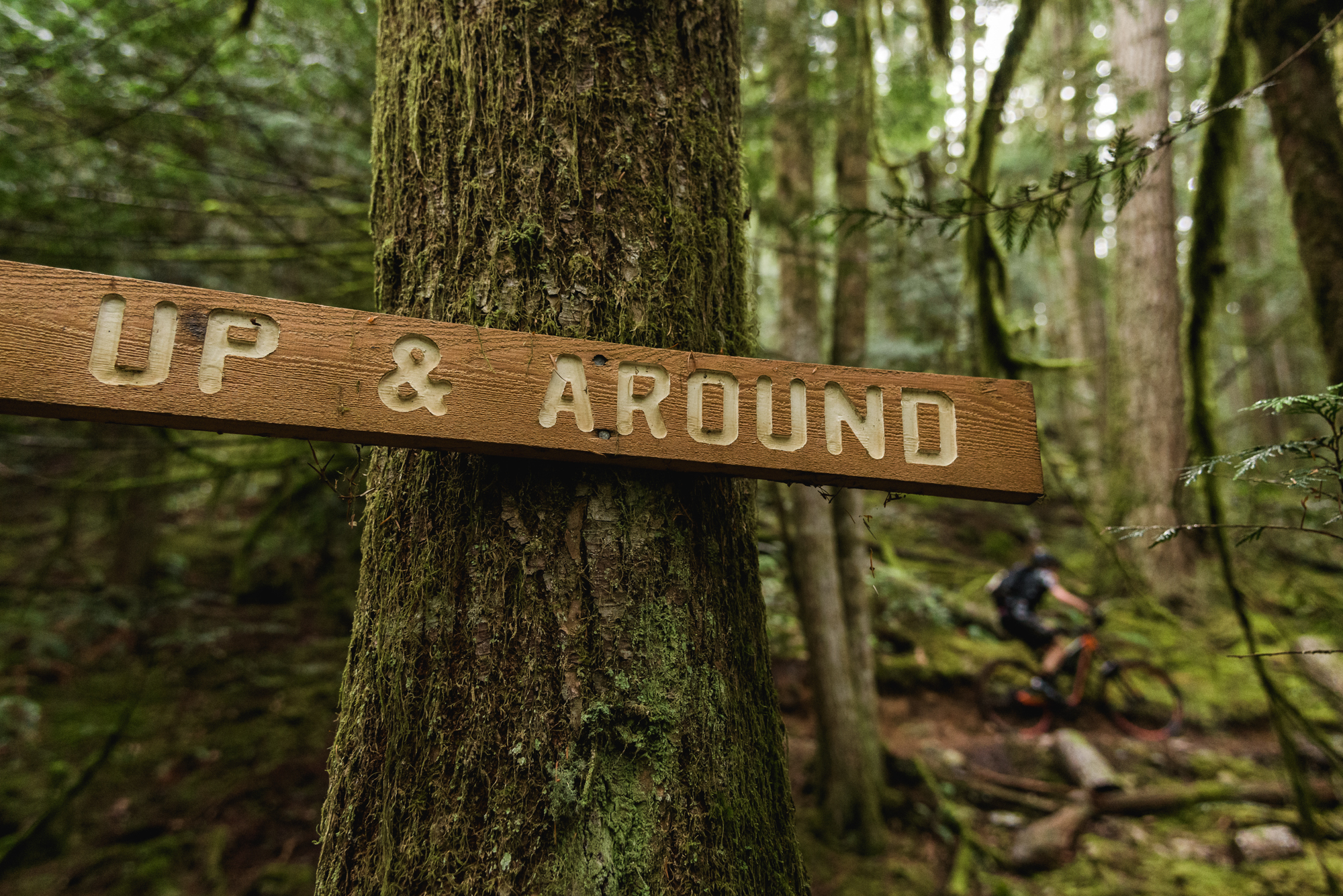 It’s been a riveting week of racing, with moderate temperatures, rain to add some tack to the dirt and some excitement to the trails.  Tomorrow, it’s Squamish, the final stage of BCBR Lucky 13. Does any town do mountain biking as well as this Sea to Sky recreation paradise does? BCBR racers will find out how sweet it is when they saddle up for a 53 km beast of stage with 1600 vertical metres of climbing. On the trail menu – a veritable feast of Squamish singletrack including 50 Shades of Grey, Half Nelson, Pseudo Tsuga, Hoods in the Woods and the stage’s Feature Trail, Leave of Absence.

Though Burke put on a show of strength and smarts today on the Sechelt to Langdale stage, anything can happen in stage racing. A mechanical, flat or crash could make the difference. Either way, it’s bound to be an exciting finale to BCBR Lucky 13.