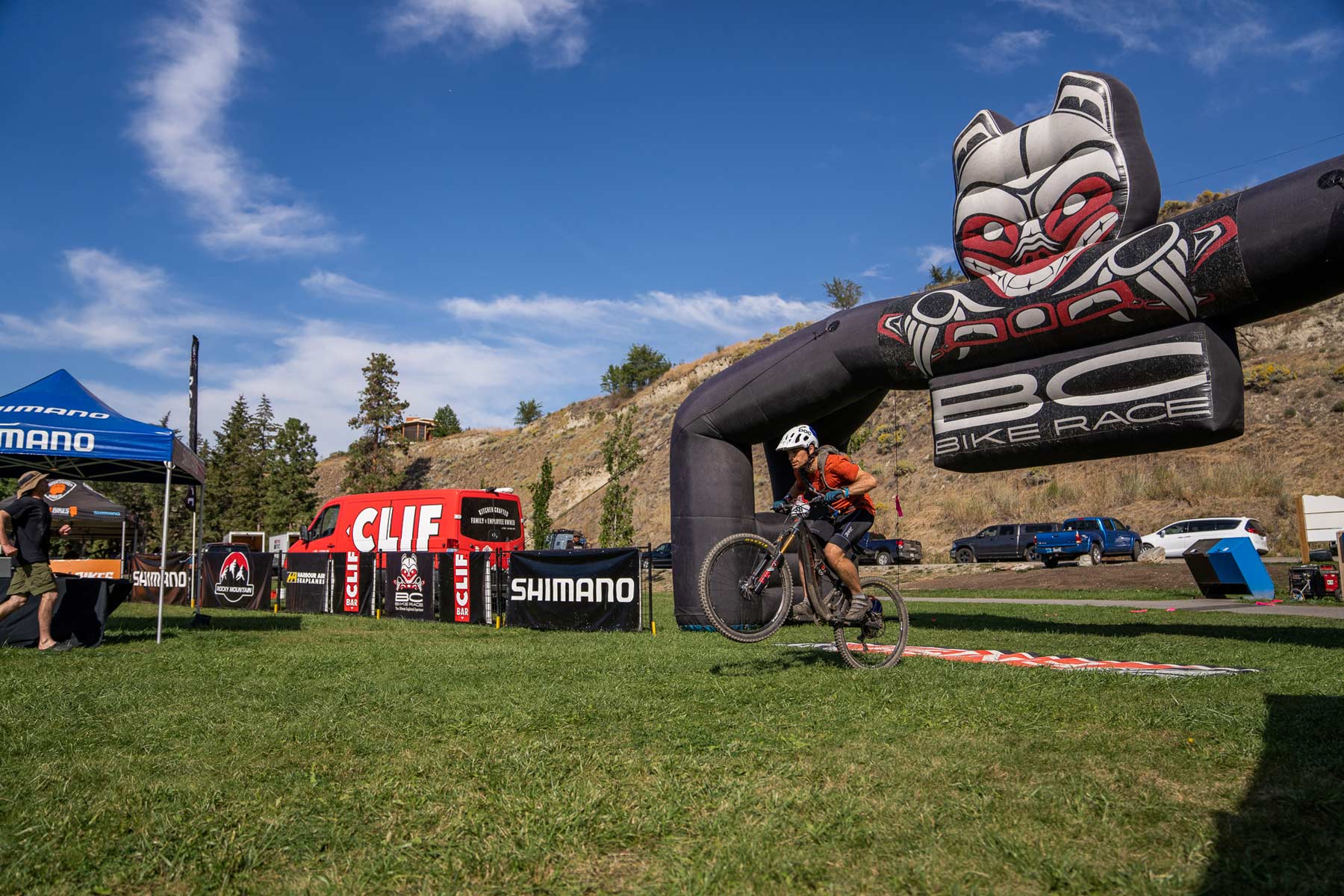 By scott schneiderSeptember 23, 2022No Comments

BC Bike Race is a seven day race and every single day counts. There are no freebies. Day 7’s tour through Naramata’s Three Blind Mice network was no victory lap, with challenging terrain and tactical battles delivering fireworks on the final day. Peter Disera and Sandra Walter held onto their leads, but not without some drama on course.

This year’s course was one of the most exciting, and physically demanding courses in BC Bike Race’s 16 year history. Throughout the field, racers emerged from the Naramata woods showing signs of battle. Sweat, dust and the occasional streak of blood were only the visible marks of the week’s racing. As soon as riders crossed the line, the competition turned to camaraderie. High fives, even some sweaty hugs between new and old friends celebrated completing a massive week on the bike. 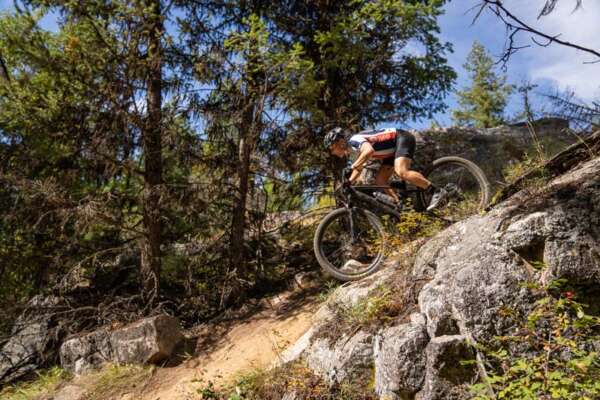 At the front of the women’s race, two long-time friends ended their week in the Okanagan with a day of friendly competition. Sandra Walter and Catharine Pendrel rolled into Stage 6 solidly in first and second place. They’ve also spent a decade training together. After a week of racing for the BCBR lead, the tour of Three Blind Mice was a rare chance to race together.

“Today was super fun,” says Walter. “We ride together all the time, so we can follow close and have a good time. I mostly stayed on her wheel.”

“We chatted about it before, riding together. We had a good, hard race out there and then pushed on the last downhill,” the two-time world champion said. But friendly rivalries are still rivalries. “I was going to let some guys behind us by, then Sandra went by instead. ‘Ok,’ I thought, ‘It’s On.’”

“I did put in one little attack before the last descent,” Walter said at the finish. “I ended up blowing a corner right after though, and she led from there on.”

Pendrel takes the final stage win but, after a blistering first five days of consecutive wins, Walter takes the win at the 2022 BC Bike Race.

“I won the first five days by riding steady and climbing strong. I know Catharine tends to come on strong and I tend to fade, so I went harder at the start of the week. I thought I might as well go for it while I have it.”

Lauren Cantwell also rocketed off the line in Kelowna seven days ago but, with a deep women’s field chasing, had to fight to hold her position.

“I had a really strong first few days. I’ve known Kaysee for a long time and knew she’s an amazing technical rider, specifically descending. Her legs came around the last three days and I’ll admit I was nervous. I was doing all I could to hang on to that lead.”

She had good reason to be worried. Kaysee Armstrong was coming on strong, landing four podiums in the final four BC Bike Race stages.

“I don’t know what happened inside of me to make up so much at the end,  but all of a sudden I was racing really fast,” says the Tennessee rider. It wasn’t quite enough to catch Cantwell but, for a return from mid-season knee surgery, it was a positive week for the Liv racer. “I think I was just getting comfortable on the bike after two months off. The first day, I was walking stuff. By the end, I was like ‘whatever, let’s do this!’ I was pretty stoked to get third on the stages four times. I really enjoyed it.” 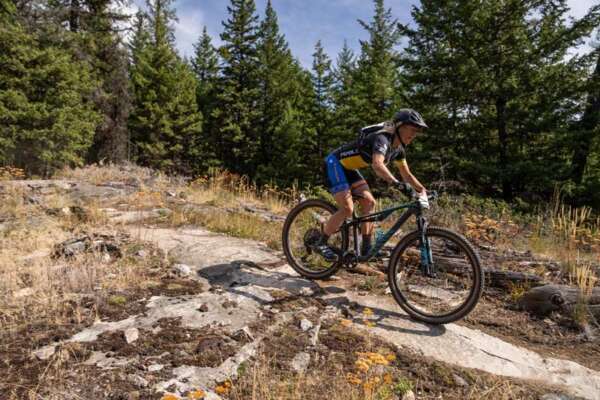 With one of the most exciting and dynamic men’s fields in the history of the event, Friday’s ride was a more business-like affair. Five riders had a shot at the podium going into Stage 7, so racing was full-on the minute they crossed the start mat.

Rob Britton led early on, chased by Peter Disera, Carter Nieuwesteeg and Luke Vrouwenvelder. As the group started an epic descent back to the beach, Disera led with Nieuwesteeg right on his wheel. Burke was pushing hard to catch Britton.

For Carter Nieuwesteeg, sitting second overall coming into Stage 6, just ahead of Vruwenvelder, the pressure was on. “At one point, Luke was catching on. That was stressful, but Pete and Geoff were encouraging me to keep going, which was pretty awesome.”

Nieuwesteeg kept the hard-charging Rob Britton in his sights on the climbs, then made the pass to take second on the day and second overall at the 2022 BC Bike Race. It wraps up a busy end-of-season run for the Santa Cruz racer, with 13 races in 17 days. That’s quite the effort to manage, let alone walk away with a win and a BCBR silver.

“My goal with all these stage races is to be consistent. It’s always a war of attrition. If you can avoid crashing, bonking or mechanicals, you’ll usually be ok,” Nieuwesteeg said before the podium, adding “But I’m ready for a beer.”

While BCBR is a race, sportsmanship ultimately trumps competition. Luke Vrouwenvelder was in a heated battle for second place in Naramata. He’d traded leads with Peter Disera early in the week and, after slipping into third behind Carter Nieuwesteeg on Stage 5, was working hard to make up time on the final day. But, when Felix Burke crashed in front of him on a rowdier section of the descent, Vrouwenvelder set aside his podium ambitions to make sure his fellow rider got off the course safely.

“It was a split-second decision, but there was no decision, really. There was no question I was going to stop. Obviously the GC is a big takeaway for me this week, and it would be sweet to be on the podium, but you gotta look out for the guys you’re racing with, first and foremost.”

At the finish line, officials and racers agreed with Vrouwenvelder’s call to stop and help out and the Giant Factory Racing rider retained his third place in the overall. “Luke stopping to help Felix, that’s pretty cool when second is on the line,” Nieuwesteeg said. “Kudos to him”

While a very dramatic race for positions played out behind, Peter Disera put his shaky start to the week behind and put himself on the front of the race. After trading leads with Vrouwenvelder the first few days, Disera won the final four race stages in the Okanagan.

“I think I just had such a nervous, excited Stage 1 and, coupled with good legs, went well over my head.” After winning Stage 1, Disera dropped 10 minutes on Stage 2 in Salmon Arm. “I think I could have mitigated my losses there a bit better. After Silver Star, I realized I might be still in it and went all-in in Vernon.”

The Canadian Olympian didn’t falter once after that. Even a flat tire at Apex couldn’t keep him off the top podium step. Disera won five of the week’s seven stages on his way to winning the 16th BC Bike Race. 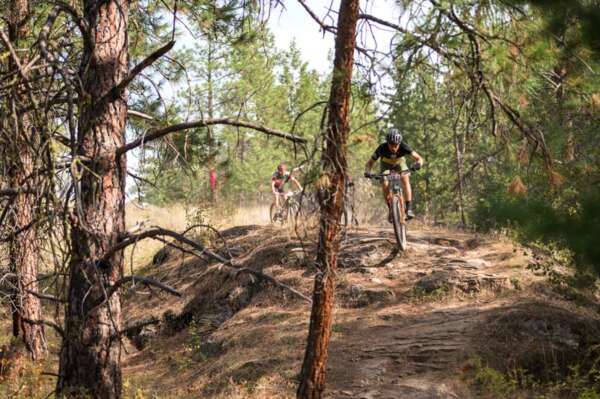 Working together to get through a big week

BC Bike Race doesn’t pretend to be easy. With this year’s course being amongst the hardest in the event’s long history, even the pros were leaning on each other to make it through the week. Deeper in the field, a helping hand and a little inspiration was essential to making it across the final finish line.

“I’m so happy I was able to finish, I had a great time and met a lot of great people,” says Maximiliano Smolkin, originally from Argentina. “Those climbs, I never would have done it if there wasn’t such a great group of people riding them in front of me!”

Valerie and Alan Terada traveled together from Hawaii and crossed the finish line together in Naramata.

“It was a challenge, but we made it!” says Valerie. While they raced in individual categories, getting through the week was a team effort. “He’s a really strong rider, he was like my pace bunny. He’d go ahead but wait and give me gels and food on the trail.”

Crossing the finish line was about more than just riding mountain bikes.

Everyone learns something about themselves over seven days of racing, whether it’s the first BCBR or, say, their 16th. Graeme Fitch has raced every stage, every year, since 2007.

“This year has been great, and really hard. The hardest year, I think. Not the longest, but the hardest.”

What keeps him coming back?

“It’s the best week on a bike. There are always new trails, you just have to get out and enjoy it!”

While there are riders that are taking home awards, every rider who finishes BC Bike Race has accomplished an impressive feat.

Heather Cook was the second last rider across the line, just 31 seconds ahead of the Lantern Rouge after five hours of racing. The retired firefighter from Oakland, California summed up her BC Bike Race strategy quite simply.

“There will be chaos. Keep pedaling!”

Cook was inspired to race BCBR by Dan Robertson. The two went through firefighting training together over three decades ago. “It’s been a bucket list event for me forever,” says Robertson. “When she retired, I convinced her to sign up. After the first day, I thought she hated me.”

The two were both smiling at the finish line though. For Robertson, thinking of the sweet singletrack reward helped him through the long climbs

“On one of the days, when I was really suffering, I thought to myself ‘this is like going to an all-you-can-eat smorgasbord and eating until you can’t anymore. But you still want more.”

If you’re inspired to race, registration for the 2023 BC Bike Race opens at noon PST on Tuesday, September 27 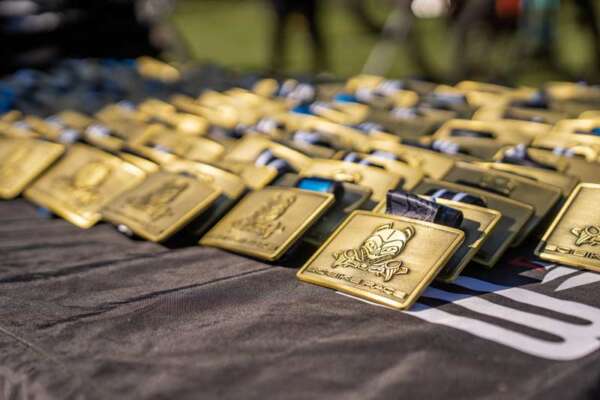