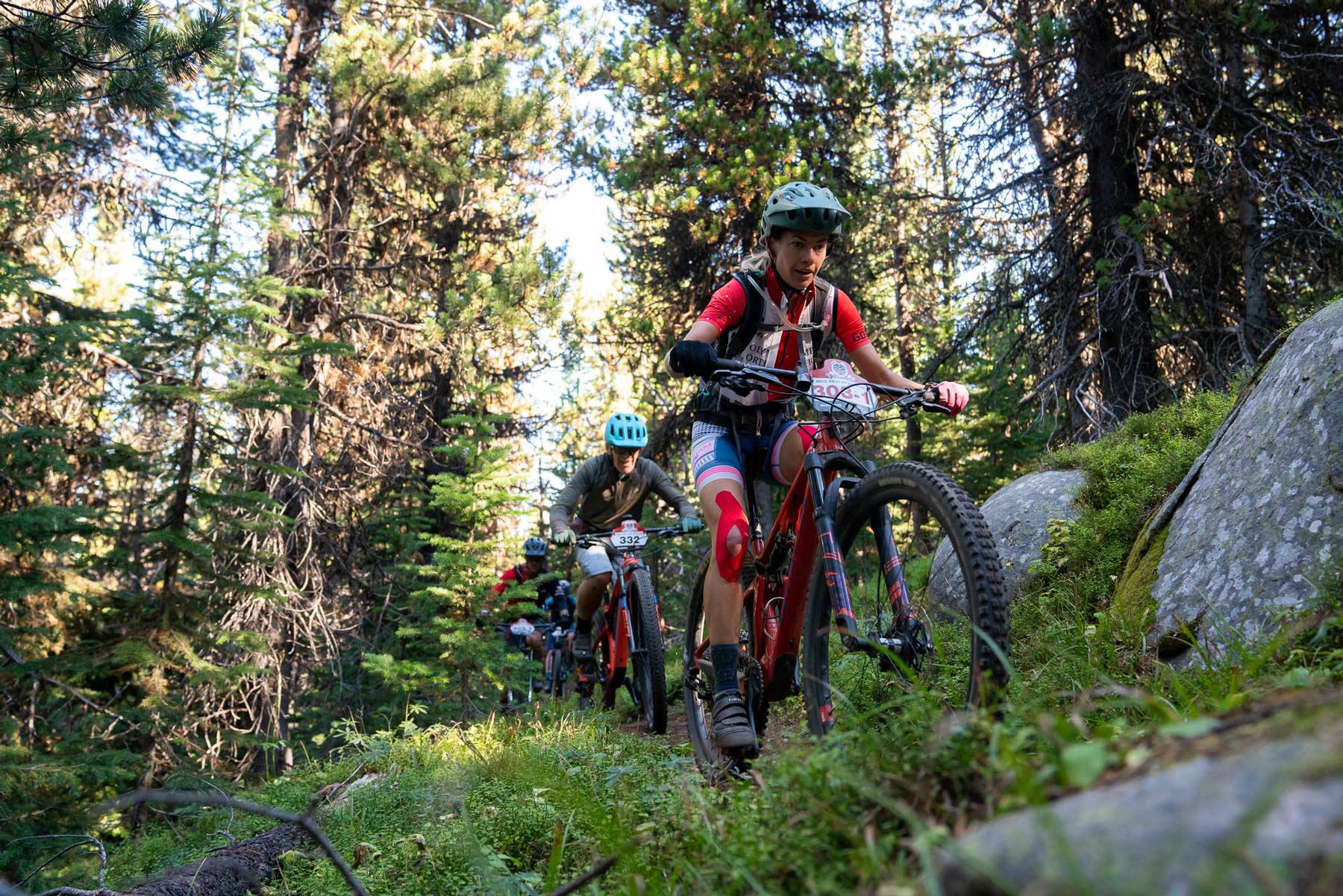 By scott schneiderSeptember 22, 2022No Comments

After five days of intense racing, the 16th BC Bike Race reached its high point. Apex Mountain served as, quite literally, the apex of the race. Topping out at 2,175m elevation, Stage 5’s 28-km backcountry-style excursion may have been short, by BCBR standards, but still served up 1,280m of climbing.

The reward was 13 km of nearly untouched sub-alpine singletrack before one very punchy climb to the first of two visits to the week’s high point. With 360-degree views over the Okanagan’s valleys and mountain peaks, it only made sense to visit twice. After a loop down the perfect loamy dirt of Apex’s “The Good, the Bad and The Ugly,” racer’s climbed back up to the summit before running through “The Gauntlet”, a restored trail bench-cutting back to Apex village. From the summit, there was only one question for racers. Were they feeling lucky? Well? Are ya? 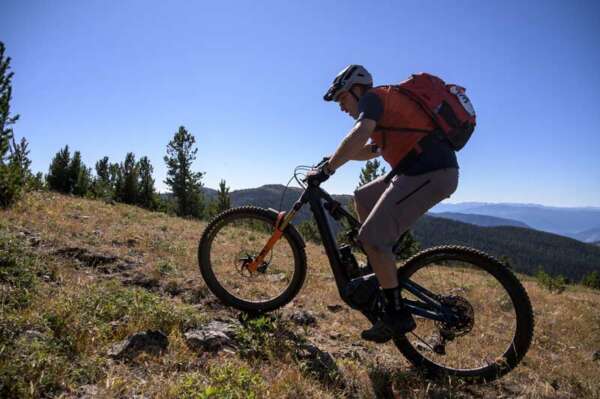 Catharine Pendrel was one rider that was definitely feeling the Apex singletrack. It might not be luck that carried the two-time world champion to the finish line first, so much as a career’s worth of training. But the recently-retired pro was happy to take the win.

“Today was good! I knew it was a shorter day. My goal was to stick with Sandra as long as I could. But I was moving good and with a solid group. I knew I was wanting to make passes and she was maybe not feeling as chipper. So I just kept charging.”

Going into the day’s final climb, Walter was closing in on her long-time friend and training partner. Pendrel dug into the 3-km grunt up the steep fire road back to Apex’ summit to hold her advantage into the final, lengthy descent. The stage winner and this week’s overall leader are friends and training partners off the course, meaning they know each other’s strengths and weaknesses inside and out. How is racing head-to-head against a friend?

“I think it’s more fun because we can chirp each other on course,” Pendrel says with a laugh. “Honestly, I didn’t expect to be able to race for the win, so today was fun. But we both have so much respect for each other, and what we can do on a bike, that it’s just a good time.”

Pendrel retired right around this time last year. Since then, she’s taken over coaching Canada’s national mountain bike team. After a year on the other side of the course tape, getting back on the start line is like, well, riding a bike. Almost.

“Yesterday was the first day that I started to feel like I could push hard the whole race. I have a good base of fitness but no intensity,” Pendrel shared. “I think you get that cool crossover where, if you have a good base, you get fitter later in the race. Or I went too hard today and I’ll suffer tomorrow, We’ll see!”

Pendrel takes the Stage 5 win, but Walter holds onto the women’s race lead. Kaysee Armstrong finished third, again, on Stage 5, but has a way to go to close in on Lauren Cantwell’s lead.

The BCBR podium isn’t the only race going on, though. Amity Rockwell is one of the few riders taking on the monumental mountain bike- gravel stage race double. When racing wraps up in Naramata on Thursday, she’ll have two days to recover before starting all over again. That is, as they say, tomorrow’s problem.

After contesting the podium early in the week, a crash in Vernon put the gravel-racer-turned mountain biker a bit further back in the pack. Rockwell’s still stoked on the week’s demanding course.

“I think I have most of the skills needed, but half of the confidence. It’s a matter of talking myself up for each stage. Then, when it’s done, it’s not so bad after all,” Rockwell says. “I did gravel last year and everyone was trying to talk me into staying. Then I saw how much fun everyone was having. This year, I’ve been riding mountain bikes more consistently, and I’m glad I’m doing both.”

Pro men: The Good, the veteran and the less lucky

With Luke Vrouwenvelden fading slightly off the pace at elevation, Disera still leaves Apex with the race lead. But he still has Carter Nieuwesteeg and the American breathing down his neck with one stage remaining.

Another rider building momentum is Canadian veteran racer, Geoff Kabush. He’s picked up speed all week leading into his near-win on Stage 5.

“Today was a ‘tortoise and the hare’ day for me. Rob went out early and laid down some big watts. I just let the first four go and didn’t really think I’d see them the rest of the day.” Racing at elevation is always tricky and the veteran used his experience to pick off racers, one-by-one.

“I got past Luke and Carter and could see the top two guys on the last climb. Pete had a puncture, so I got close, but couldn’t quite track him down.”

Kabush’s podium throws yet another wrench into what’s been an enthralling week in the men’s G.C. While the Yeti-Fox rider didn’t look to be in the running in the early days, he’s crept ever-closer to the podium.

“I kinda gave up hope yesterday after a rough day, but in a stage race you never know,” Kabush said after his Stage 5 second place. With one, very technical day remaining, the race is far from over.

“Going into Three Blind Mice, anything can happen. We could still see some drama”

After today’s podium, will the Canadian race for the win on the final stage?

“Well, you never know. The young kids have been on and off,” the 45-year-old says of his mid-20’s competitors. “So maybe I’ll sneak through. I’ll try, anyway.” 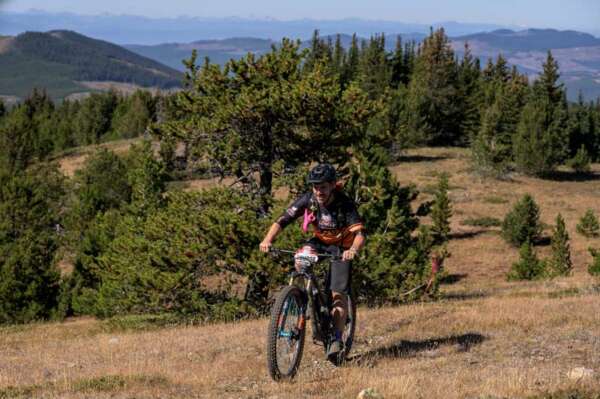 Many battles, personal and in the different leader’s jerseys, climbed towards their narrative climax as BCBR’s 2022 route maxed out at its peak elevation. Some riders are in friendly battles for team or age group GC races with new, or old friends. Others are working hard to make it to the finish line. No day at BCBR is easy. Riding seven in a row is a truly impressive feat that everyone who attempts, let alone finishes, should be proud of.

Jesper Vilstrup Thomsen and Kim Pliniussen are racing the men’s team of two race with a larger squad than most. The two Danish riders have had their family cheering for them at the finish line every day this week. On Wednesday, the entire extended family ran together into the finish straight with the two racer’s.

It’s Pliniussen’s second time at BCBR. He’s back to race with Thomsen. The pair regularly races together in Europe, including a couple attempts at a 700-km mountain bike race in Norway that hails itself as the world’s toughest mountain bike race. So, how does BCBR compare?

“The descents are a lot longer, steeper and more technical. We’re having the time of our lives,” says Thomsen. The pair are thriving on the added adrenaline. “You can jump all over, it’s so much bigger,” adds Pliniussen.

“In Europe, it’s known as one of the Ultimate Singletrack Experiences, like you call it,” says Pliniussen. The two switch up leading each descent, so each gets their chance to lead down the Okanagan’s sweet descents.

In the women’s 50+ race, Petra Storm is riding the BCBR rollercoaster of good days and off-days just like the leaders. For the Colorado racer, Apex was a high.

“It was a badass day! Yesterday, I was crying. Today, I was smiling.”

Liz Rasainz is diving into mountain life all the way from the flat lands of Fort Lauderdale, Florida to race the women’s race. After nearly a week in the Okanagan, she’s fully embraced the B.C. gnar.

“Today was awesome! Dry, but awesome. I loved the chunky terrain and amazing views. There was that really hard part on the downhill, but it was otherwise really fast and fun!.”

Another returning racer is Rob Haworth. Hailing from the U.K., Haworth is back with a group of Brits for his third BCBR. What keeps bringing him back across the pond?

“There’s just nothing else like it, as an event. We go back home ot the U.K. and we just wish we hadn’t left. So we’ll be back again for sure.”

For the Grand Finale of 2022 BC Bike Race, racers head back where BC Bike Race first touched down in the Okanagan. Naramata’s Three Blind Mice network, with its mix of iconic lake views, technical climbing, rock slabs and some wide open descents is a fitting day to end a hard week of racing. It’s a guided tour through the back yard of BCBR president, and Stage 6 course director, Dean Payne. There’s 45 km on the bike, 27km on the clock, and another 1,280m of elevation gain.  After the finish line, it’s a neutral roll directly to the beach for high-fives, hugs and maybe a couple beverages to celebrate racer’s accomplishments, wrapping up a big week on bikes at the Ultimate Singletrack Experience.