A Royal day crowns new leader at BC Bike Race

By scott schneiderSeptember 21, 2022No Comments

Not many races have two Queen stages but, with the second day in the Vernon area climbing 1,850m up to from Kalamalka Lake to the King Eddie plateau, there is no other way to describe Stage 4 of the 16th BC Bike Race.

After a pleasant roll through Kal Park, the day’s racing got down to business. A full 12.5km climb up to the Plateau spread out the field, with a jaunt along the highly technical “Royal Ascent” finishing off most of the day’s climbing. Rolling, but demanding trails led to the top of a raucous, 9km descent back down to the valley below. The steep gnar of Big Ed, one of the week’s most challenging trails, led into high speed corners and then a rolling finish to the timing mat. 51 km on the bike and 45 km on the clock made Stage 4 a truly Royal day. 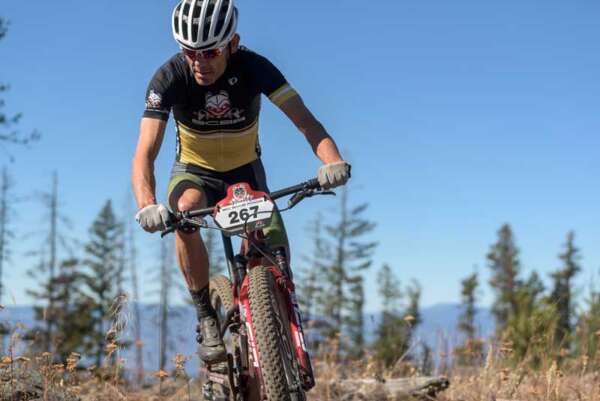 Battles for the crowns in BCBR age categories were heating up on the King Eddie Plateau, too. Folsom, California’s Emma Briggs and Edmonton, Alberta’s Shantel Koenig are separated by less than two minutes after 16 hours of racing. Clif Bar’s Terra Beaton sits third.

“I’ve been pleasantly surprised with how it’s going” Beaton said. “I just came to ride the route, but I’ve met some fantastic people. I don’t think I’ve had that in a race before, so go BC Bike Race!”

Beaton, who works with Clif, has had her eye on BC Bike Race for years now. This year, the Colorado resident finally has her chance to take part.

“Clif’s been part of the race since the beginning, and I really wanted the opportunity to sign up, I love riding in Canada, the endless singletrack. There’s just so many trees and so much dirt.”

Not all competitions are within categories. Patrick Jansens is registered in the 50+ men’s category but, after finishing an incredible 11th overall on Stage 4, has his sights set further forward in the field.

Last time Jansens was at the BC Bike race was back in 2011, the early days on the coast. What brought him back, 10 years later?

“This is world class riding. You can’t find this anywhere in Europe, and I’ve raced all over the continent.” Jansens doesn’t just ride trail. He’s a professional trail builder back on the other side of the pond. Vernon’s trails stood out. “Today at the top, it was really technical and rough. Not descending, but just rough. We haven’t had that in a couple days, so that was great.”

“That big descent was brutal, especially without a dropper post.” Jansens added. That bit of equipment choice makes the Dutch rider stand out as much as his incredible pace. Unlike when he raced here in 2011, there are few, if any, others rocking the rigid post at this year’s BC Bike Race. “Ha ha, I’m the only one! I don’t really need one in the Netherlands. But I’ve been riding without a dropper post for 30-plus years, so it’s fine.” 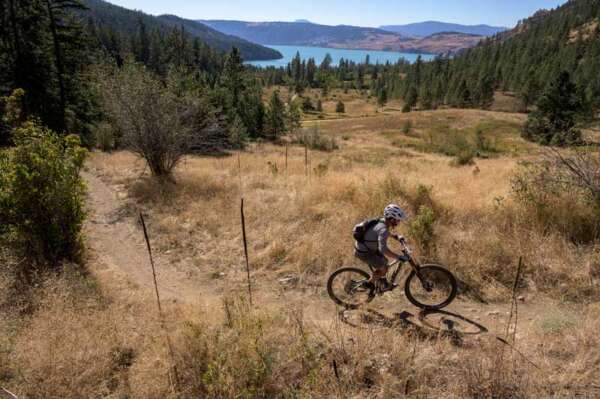 In that front group, a day on the King Eddie Plateau turned into another battle royale among the front men. The top 3 men are separated by just over three minutes but, with the leader’s jersey changing hands every other day, the standings are far from settled.

Peter Disera attacked off the front, followed by Carter Nieuwesteeg and Rob Britton. Disera stayed clear of the pack to take the win, but the standings shuffled significantly before the race hit the timing mat down below. Luke Vrouwenvelder chased past Britton to take third on the stage.

“I kept it pretty close with Carter and I caught Rob. But Peter had some solid pace for us today,” said Vrouwenvelder, adding that the week’s racing has been full-out, every day. “I think I’m a little favoured towards the longer days right now and was kind of thinking today would be a bit longer. But 2.5 hours as a Queen Stage? It’s fast, man.”

It wasn’t quite enough to hold onto his leader’s jersey, but the U.S. rider knows the race isn’t over until it’s over.

“I’ve been riding at a solid pace, riding within myself for most of the race. I feel like I’ve been riding the same speed most days and Pete’s been doing these peaks and troughs. Maybe today was a peak and tomorrow is a trough. But who knows, he’s riding super strong. Hats off to him for sure.”

It’s the first BC Bike Race appearance for Vrouwenvelder and his Giant Factory teammate, Stephan Davoust. When the opportunity to race presented itself, both riders were quick to sign up.

“It’s been a bucket list item for both of us and it’s lived up to the hype so far. I like the descents when they’re physical and steep and rowdy and that’s what you get so it’s been amazing!”

How is the American strategizing his debut BC Bike Race podium run? Well, he’s looking to a local veteran, Geoff Kabush, who currently sits in fifth in a very dynamic men’s field.

“It’s hard to count Geoff out. He’s such a smart racer and really tactical. He knows his stuff really well. At first, I thought I’d just mark Geoff, but Pete seems to be on really good form, too. So it’s a mix of trying to be like Geoff with how I race and matching Pete’s efforts when he goes.”

The women’s standings look more settled at the top, with Sandra Walter extending her lead over Catharine Pendrel every stage. But the battle for third is still wide open. Lauren Cantwell has an advantage over gravel racer-turned-mountain biker Amity Rockwell. But it’s Kaysee Armstrong, third for a second day in a row, that is steadily moving up the standings.

While the two Queen Stages are through, there’s plenty of racing left at the 16th BC Bike Race. Stage 5 carries riders to the week’s highest elevations.

Starting above 1,600m and climbing well over 2000, rider’s have a shorter distance, just 28 km, but all at elevation. A sizable opening climb carries racer’s up to rarified air, before a traversing backcountry loop pushes them to the week’s high point, and two ripping descents back to the village. While the forecast is for frosty weather, just like when this stage debuted in 2021, that will do little to dampen rider’s spirits. It was voted the racer’s favorite stage last year.